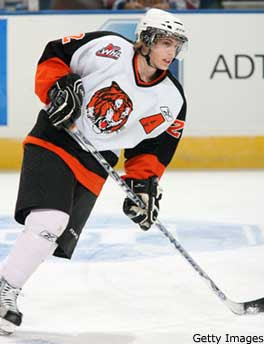 Edmontonian Tyler Ennis helped out his home town last night, taking out the Prince Albert Raiders in a 6-2 win, by scoring all 6 goals!!!! The Raiders are battling the Oil Kings for the final playoff spot. The 6 pack is one goal short of the WHL record held by 5 different skaters. The last to do it was former Swift Current Bronco Kimbi Daniels (who just happens to hail from Brandon)who just happened to score all 7 in a win over Medicine Hat 9 years ago. 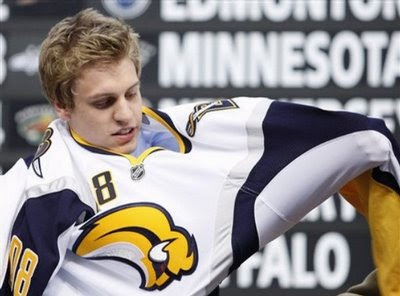 The Buffalo Sabres first round pick notched his first 3 goals (a natural hattrick) in an 11:13 span of the 2nd period. He scored 2 more, giving him 5 in a row in, 1:57apart in the 3rd, before adding his 6th late in the final frame, and as you would expect in a 6-2 game it wasn't an empty netter. The outburst gives the gold medalist with Canada's World Junior team 41 on the season, pushing him past the 40 goal mark for the 2nd time and putting him in a tie for 3rd in WHL scoring. He might only be 5.09, 164 lbs (listed anyway) but if he can be this explosive it should overcome any shortcomings (pun intended) his size might present.

Just give him the POW award already.
Posted by Dean Millard @ 12:16 PM