It's About DAUM Time! 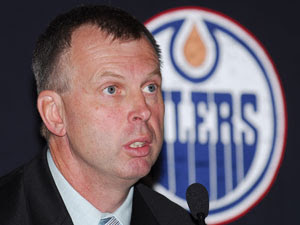 With the Springfield Falcons mired in next-to-dead-last in the American Hockey League standings, the Edmonton Oilers have gunned head coach Jeff Truitt and replaced him with Rob Daum.

You can hear from the new Falcons bench boss tonight as he appears on The Pipeline Show with Dean and I.

Daum has long been a favorite of TPS and now assumes the role we believe he should have had at the start of the season. I've spoken with coach Daum a few times this year and so I know how anxious he has been to get back behind the bench - not because he disliked what he was doing but because he is first and foremost a coach.

The success that Daum had while leading the ship for the Alberta Golden Bears is well documented. He was also very successful behind the bench in his first season with Houston of the AHL where he had a .662 winning percentage. The next year Daum's club was a shadow of its former self having lost starting netminder Josh Harding to the NHL (for much of the year), Patrick O'Sullivan to the L.A. Kings and leading scorers Erik Westrum and Kirby Law.

I want to make one thing clear about this coaching change though - Dean and I have spoken with a lot of the Falcons this year and to a man, no one has expressed frustration with the coaching staff or with Jeff Truitt in particular. The same cannot be said for the previous year under Kelly Buchberger even though they had a better record in 2007-08.

While the players this year are clearly frustrated with the team's dismal performance, not one I have spoken with has suggested that their failure on the ice should be hung on the neck of Truitt.

It's unfortunate that the coaching carousel last summer worked out the way it did because Rob Daum should have been the bench boss last fall with Truitt on his staff - not the way it's worked out now.

Truitt's junior track record is strong and I'm sure he'll bounce back with another WHL opportunity before long. He's a good guy and I personally wish him well.

That said, I fully expect the Falcons to play much different under Daum who has always had a strong offensive style. Can he get the birds into the playoff picture this year? Doubtful because of how far back Springfield is but hopefully they show some improvement down the stretch and give the fans down there some reason to look forward to next year.
Posted by Guy Flaming @ 9:24 AM