Falcons Done In by Devils, Huge Win For Oil Kings 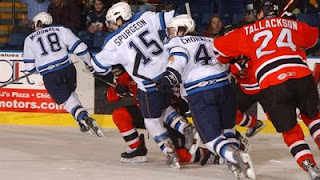 Despite a few new faces in the line up, the Springfield Falcons were doubled up by Lowell Friday night, giving them 5 straight losses.

Both Ryan Potulny and J.F. Jacques who were assigned to Edmonton earlier in the day suited up for Springfield, while Danny Sabourin made his Falcons debut and Taylor Chorney returned from a mild concussion, but it wasn't enough.

Springfield actually led 2-1 in this one thanks to second period goals from Carl Corazzini and Potulny, but a pair of goals from 2008 Canadian World Junior hero Matt Halischuk, including the winner in the 3rd gave the unholy the victory.

Once again a slow start where Springfield was outshot 12-5 in the first set the birds back. Overall they gave up 10 more shots than they put towards Lowell pipeman Jeff Frazzee. Sabourin in his inaugural Falcons contest stopped 34 shots with 2 Lowell goals coming on the power play. You can here post game comments from the netminder and head coach Jeff Truitt here.

In his first game this year, Jacques was -1 with one shot, while skating on the right side with Rob Schremp at left wing and Potulny in the middle. Taylor Chorney also registered a shot in his first game after missing the past 3. Potulny scored once and put up 4 shots while also going -1.

I received a message from a Springfield player tonight responding to a question I had about team morale. His answer was that spirits were high on the farm, the team was working hard, they were just having trouble scoring goals. So atleast things aren't as bas as they might appear on the outside.

As for the Edmonton Oil Kings, they picked up a huge win over Regina on the road Friday night. The OK kids, the Pats and P.A. Raiders came into the contest tied for 8th, and thanks to a Brandon win over Prince Albert and their victory, Edmonton is temporarily in the post season.

There are 2 great write ups on this contest. One from the Oil Kings website and the other from the view of Past broadcaster Rod Pedersen.

Two things strike me about reading the stories from both websites. One is how much of a gut check and team effort it was by Edmonton, and the other is how much the fans are fed up with Colton Teubert and some of the other Pats.