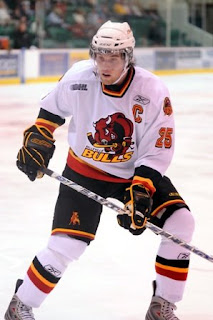 The NHL trade deadline is rapidly coming up and today saw a fairly significant deal between the Pittsburgh Penguins and the Anaheim Ducks which included Eric Tangradi of the Belleville Bulls.

Certianly the deal will be looked at more for the NHL players changing sweaters - Chris Kunitz goes to PGH for Ryan Whitney - but Tangradi shouldn't be overlooked in this trade. The Belleville captain was a 2nd round pick by Brian Burke's Anaheim Ducks in 2007 after he ended that season on a tear including 17 points in 15 playoff games.

The next year he helped get the Bulls to the Memorial Cup and he had 18 more playoff points on the way there.

Tangradi played for USA at the 2009 World Junior Championship in Ottawa and is known for his tenacious in-your-face style of play. At 6'4 and 221 lbs he's already NHL size and with 38 goals and 87 points this year in the OHL, he's clearly ready for a bigger challenge next year. The newly turned 20-year-old should find a place with the Penguins sooner rather than later.

Good pick up by Pittsburgh but I realy like the guy they gave up in the trade too.
Posted by Guy Flaming @ 1:43 PM