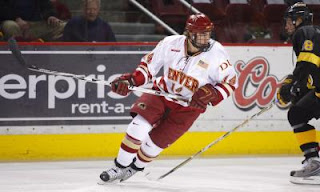 A little while ago I made a brief mention of the fact that there are several AJHL alum who are playing extremely well this year for various NCAA programs. Many of them are actually goaltenders but for this time around I'm looking strictly at skaters.

Some of these guys are drafted, some aren't but should have been if not for issues like a lack of size. And again, like every week when we do the top 5 lists, these are personal opinions and not necessarrily the top 5 guys in the eyes of scouts or coaches polls or statistically speaking. They're simple the top 5 guys in my opinion.

That said, feel free to comment by adding some other names I could have considered.

It might be the local boy aspect that has me always checking the Denver Pioneers box scores to see if Martin's name appears. Maybe it's because I took him late in the draft during my fantasy league's 2006 Draft. It also might be that I interviewed Jesse for ISS during his NHL draft year so his personality kind of stuck with me from there.

The Atlanta Thrashers took him late in their draft as well and have really been hands off on his development ever since. When Jesse appeared on The Pipeline Show earlier this fall he talked about how the NHL club told him not to bother attending their summer prospect camp.

After his AJHL days in Spruce Grove where he put up strong numbers until an injury sidelined him long term, Martin went on to the USHL's Tri-City Storm. Now in his sophomore year with the Pioneers, Martin has a respectable 18 points. He's playing down the depth chart behind a myriad of household names so it an accomplishment to a degree that he's been able to land in the top 10 on his team's scoring. 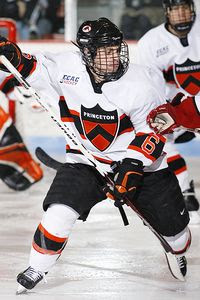 It's a bit of a down year for Jubinville who led the ECAC Conference in scoring last year but finds himself 4th on just his team this season. He's on pace for about 25 points which would be less than the number he's ended up with in each of the last two campaigns. He's now a senior so he should be at the top of his game but for whatever reason (chime in if you know) he just isn't producing at the same level as he has been.

Jubinville had a pair of 20-goal seasons with the Camrose Kodiaks before joining Princeton in 2005-06. He nearly tripled his freshman numbers during his second year with the Tigers and last year he was a Hobey Baker level player.

The Edmontonian made his TPS appearance in late August and talked about how key the coming senior year was. Back then I thought he was a no-brainer to get a pro contract but with the way he's struggled this year, without knowing why, I'm wondering if he's got much interest from NHL clubs who might be looking at 5'10 and 165 lbs more than his NCAA stats. 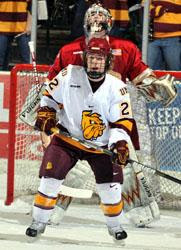 After having watched him play in the AJHL playoffs and during the Doyle Cup against Penticton, I thought that Connolly would have been a terrific sleeper pick last year. However, whether it was his diminutive size or his lengthy injury last year that scared the scouts away, Connolly went undrafted and joined Minnesota-Duluth when his AJHL days were done.

This year Connolly is surrounded by other AJHL alum and perhaps that has helped team chemistry to a degree. The 5'8, 180 lb center has 25 points in 30 WCHA games, third best on his team. The freshman got off to a tremendous start with 7 points in the first 5 games but has been on and off the scoresheet regularly since then. His recent 3-point weekend against Denver was his most productive series though since October. On February 11th he was named as the WCHA Rookie of the Week.

What intrigues me about Connolly is that, although lacking in height, he's got those stereotypical tree-trunk legs making him really hard to knock off the puck. He's a playmaker first and foremost but did manage to score 25 goals in just 37 games last year with the Kodiaks. I really think this is a guy that was overlooked and that he'll have his pick of NHL contracts when it's all said and done. 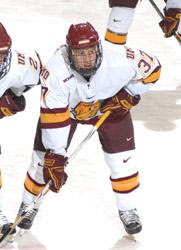 Another Bulldog enjoying a bunch of success this year is this former Bonnyville standout. Fontaine had the unenviable task of replacing Mark Letestu with the Pontiacs the season after he dominated the AJHL. The Bonnyville native had 81 points in his first full AJHL compaign and scored 30 goals in 52 games the following season.

As a freshman at Duluth, Fontaine was fairly unspectacular as he collected just a dozen points all year. This season however, the 5'11, 165 lb forward has broken out with 37 points in 30 games so far and leads Duluth in scoring by a fair margin and was named WCHA Offensive Player of the Week back in December.

MacGregor Sharp and Evan Oberg, both Camrose alum, are also on the team as former Calgary Royals blueliner Brady Lamb. 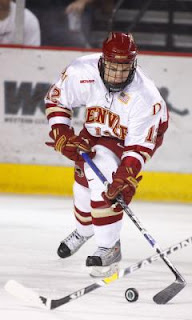 It's safe to say that "Sleepy Joe" woke up in time for the NCAA season as he currently has 25 points in 30 games with the Denver Pioneers. The Pionners are in first place in the WCHA standings thanks to Colborne's 2-goal effort against Colorado College last Friday night.

Colborne was a 1st round pick of the Boston Bruins last June and joined the Pioneers admist rumors of a planned short NCAA career. When Colborne joined us on The Pipeline Show last November he back tracked from that and said he was not looking to jump to the WHL's Tri-City Americans.

The freshman is tied for tops on the team in rookie scoring with blueliner Peter Wiercioch. He didn't get consideration for the Canadian WJC team like Wiercioch did but you'd have to think that won't be the case in 2010.

For those critics of Colborne who felt he was to much of a gentle giant for the pro game, a NCAA program which allows him up to 4 years to develop has to be considered the perfect fit. Plenty of time in the weight room will go along way to addressing the issues Colborne knew he was facing as he left Camrose for the NCAA.

Dean and I got to know Colborne during his draft year thanks to his ongoing blog that ran here at Coming Down the Pipe last spring.
Posted by Guy Flaming @ 3:54 AM