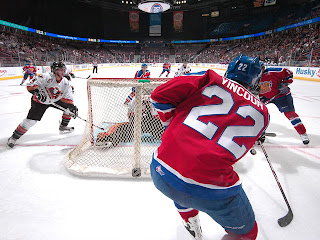 The Edmonton Oil Kings were 4-1 winners over the Red Deer Rebels on Wednesday night much to the chagrin of the crowd at Rexall Place. Confused? The local team has a promotion that should the Oil Kings score five goals, every fan in attendance gets a free Big Bacon Classic from Wendy's... and, well, the fans wanted their bacon!

At one point in the game I heard a fan yell towards the Red Deer bench "Pull the goalie!"... that was with about 10 minutes left in the third period.

Off topic for a second here but, if you haven't seen commedian Jim Gaffigan's routine on bacon... do yourself a favor and get ready to chuckle:


Anyway... back to the Oil Kings. Thanks to last night's win the second year club is still tied with the P.A. Raiders for the 8th and final playoff spot in the WHL's Eastern Conference. Since getting thumped 11-2 by Spokane a while back, the Oil Kings have been pretty decent and some players in particular are white hot.

I spoke with Vincour after last night's game... you can hear that interview HERE.

The Oil Kings are on the road this weekend for games in Swift Current and Moose Jaw then return home for 5 games in March, 4 of them at Rexall Place.

As always, you can catch Oil Kings action live on the TEAM 1260 with A.J. Jacubec painting the picture.