Garrett Wilson is the OHL’s nominee as draft performer of the week after scoring 4 goals and adding 2 assists in 3 games for the Attack. Wilson has 13 goals and 25 points in 35 games on the season, his first full campaign after spending a portion of the 07-08 season with the Windsor Spitfires. Wilson is known as a hard worker who is willing to battle in front of the opposition’s net. 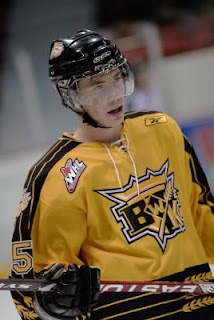 Scott Glennie wins the award as WHL draft performer of the week after scoring 2 goals and 5 points in 4 games for Brandon. Glennie currently leads the Wheat Kings and sits sixth in league scoring with 27 goals and 39 assists for 66 points while posting a healthy plus-22 rating. Glennie, a native of Winnipeg, MB is known as a finesse player who has great on ice vision.

Glennie was a guest on The Pipeline Show in late December. You can hear that interview here.

Mike Hoffman wins back to back awards after scoring 3 goals in 2 games this week for the Voltigeurs. Hoffman currently is third in team and sixth in league scoring with 37 goals and 72 points in 45 games this season. Hoffman, a native of Kitchener, ON is a smaller player who relies on his sound skill set to be an impact performer.

David Gerths wins his second award as the USHL’s draft performer of the week after posting 4 assists in 2 wins for Lincoln. Gerths, a forward from Ankeny, IA has 28 points and a plus- 8 rating in 33 games on the season and is known as a playmaker.
Posted by Guy Flaming @ 1:35 AM

Who knows where to download XRumer 5.0 Palladium?
Help, please. All recommend this program to effectively advertise on the Internet, this is the best program!