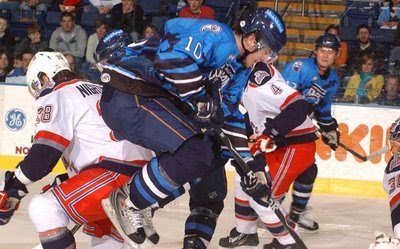 For the first time in 7 games, Springfield outshot it's opponent, and while they kept it close against Hartford Saturday night, they leave the rink with the same bad taste in their collective mouths as their previous 5 games.

Springfield fired 9 shots at Wolfpack netminder Matt Zaba in the first, but couldn't beat him. On the flip side Hartford had just 4 shots, with Vladamir Denisov beating Devan Dubnyk with a shorthanded 60 footer to put the home side down 1-0. Springfield came out firing in the 2nd, pounding the Wolfpack on the shot clock 16-2, but managed to score only once. Colin McDonald picked up his 4th in what has been a disappointing campaign for a guy who was hoping to regain the scoring touch he lost while attending Providence. McDonald's tally came just over a minute into the period to tie things at 1. About 4 minutes later though, Hartford struck back with a power play goal from Artem Anisimov, one of just 2 shots the visitors had in the 2nd. However Springfield used a 2 man advantage to pull even, Ryan Potulny snapped in a rebound for his 21st on the season and second since being returned by the Oilers, and the top goal scorer on the Falcons sent his team to the intermission even steven.

Despite another shot advantage in the 3rd, Springfield couldn't get the go ahead goal, and watched Hartford use more special teams to put this one away. Former Calgary Hitmen sniper Brodie Dupont scored his club's second short handed goal of the game and it proved to be the game winner.

For the second straight night, Rob Schremp, Ryan Potulny and J.F. Jacques formed a trio. Schremp and Potulny combined for a goal and assist, as well as 11 shots on net, while Jacques chipped in with 4 shots of his own, however the line was a combined -3. The best line for the home side was Guillaume Lefebvre, Tyler Spurgeon and Colin McDonald, who were plus 3 with 3 points. Devan Dubnyk had an obvious off night, despite stopping a 3rd period penalty shot he was beat 3 times on 16 shots, including getting beat once on just 2 shots in the middle stanza. 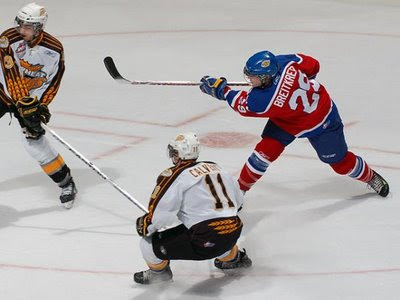 As for the Oil Kings, they took one on the chin in that great junior hockey city of Brandon, Manitoba. Brandon smoked Edmonton 6-1, with Columbus Blue Jacket draft pick Matt Calvert picking up 5 points. Edmonton took way to many penalties as Brandon went 3-10 with the man advantage. The Oil Kings were without 6 regulars including Torrie Jung who was still woozy after taking a Jesse Dudas slap shot to the mind Friday night. The Kings called up goaltender Laurent Broissent and forward Devin Ballness to fill out the roster. With Edmonton's loss and Prince Albert beating Regina, it means the Raiders and Oil Kings are tied for 8th in the east.
(Photos springfieldfalcons.com and oilkings.ca)
Posted by Dean Millard @ 8:34 PM