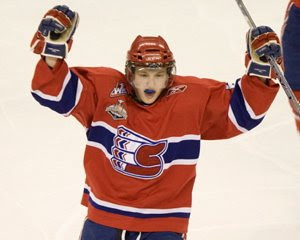 It's no coincidence that the hottest team in the WHL has the hottest player right now, as Spokane's Drayson Bowman was been named the Boston Pizza player of the week today. You can read the full release here

The defending Memorial Cup champions look poised to make another run as they've rung up 11 straight wins, but thanks to Tri-City and Vancouver also playing pretty well over that span, still sit 3rd in the Western Conference. They weren't in last week's national top ten rankings, but you have to think they'll bowl their way in on Wednesday. This past week the Littleton, Colorado product lit the lamp 5 times and helped do it 5 more while earning a plus 6 rating in 3 Spokane wins. 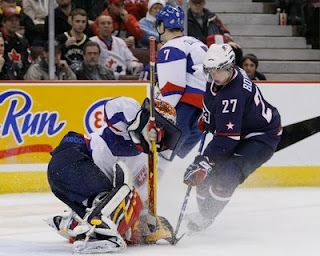 The 2007 3rd round pick of the Carolina Hurricanes didn't get off to as good of start as he did last year, despite the massive amount of praise he was getting at the World Junior Championship from a certain broadcaster. Bowman played only 66 games last year and recorded 82 points. Up until he left for the WJC he was on pace for just 79 points and that was over a full season. If you pro rated it over the 66 games he suited up for last year it worked out to just 72 points.

Whether it was motivation from the U.S. having a disappointing showing, or that he only notched 4 points in 6 games while playing on the all WHL line with fellow Chief Mitch Wahl and Seattle's Jim O'Brien, Bowman has been lights out since returning to Spokane. He has a 10 game scoring streak going right now racking up 10 goals and 9 assists over the span. He's also been plus 13 with 26 penalty minutes, including a fight with Tri Cities Tyler Schmidt a week ago Saturday. Bowman scorched the Chilliwack Bruins this past Saturday with 3 goals and 2 helpers. 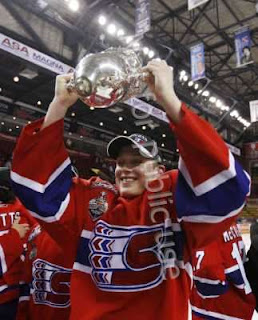 Bowman's sizzling play has his pro rated point totals higher than before the WJC, if he plays in all of the Chiefs remaining 22 games he could top out at 81 points. Just for fun though I pro rated his numbers as if he could keep up his current pace and it would give him 61 second half points ad 94 overall. Regardless if he keeps up his 1.9 point per game pace or not, Bowman should head into the WHL's playoff race red hot, which is where he was deadly for Spokane last year, putting up 20 points in 21 games, then adding 6 goals for 8 points in 4 games as the Chiefs won the 2nd Memorial Cup in team history.

Notes: Drayson Bowman might not be the only Chief getting some hardware this week. Goaltender Dustin Tokarski went 3-0 with 2 shuts outs and 81 saves on 82 shots. The World Junior gold medalist is the WHL's nomination for CHL goaltender of the week, but he'll be in tough to beat out Scott Stajcer of Owen Sound who made 130 saves in 3victories for the Attack.

The OHL's players of the week is Cody Hodgson of the Brampton Battalion. The full release is here. Hodgson beats out his World Junior teammate and current London Knight John Tavares, despite a 6 point outing from the projected #1 pick this June.

Finally in the Q, Chicoutimi Saguenéens forward Jacob Lagacé and Val-d’Or Foreurs goaltender Raffaele D’Orso were named the offensive and defensive players of the week. That release can be found here.
Posted by Dean Millard @ 11:17 AM