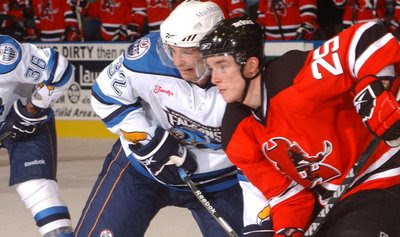 Springfield failed to pick up their 9th point in their last 12 games Friday, despite throwing everything at Lowell in the 3rd period. Scott Clemenson, recently sent down by the Unholy for contract reasons, continued his red hot play for the New Jersey lite. He was 25-13-1 while filling in for Martin Brodeur but once it was Marty's Party again, the former Boston College Eagle returned to the AHL, and the Falcons found out what it was like to face an NHL calibre goalie, even if he was only one for 40 games.

Ryan Stone scored a pair in the 3rd where the Falcons peppered Clemmensen with 16 shots and 36 overall, but ended up losing 3-2. Newly acquired Charles Linglet continued his fine play for Springfield, setting up both Stone goals. The 6.02, 212 pound left winger has 6 points in his 5 falcon games and 15 in 11 overall in February.

The loss Friday comes on the heel of an overtime win Wednesday over Portland. It was a big night for the D pairing of Taylor Chorney and Cody Wild. Wild scored the O.T. winner and was plus 2. Chorney set up another and was plus 3. Springfield is on the road Saturday against the Sharks farmhands. 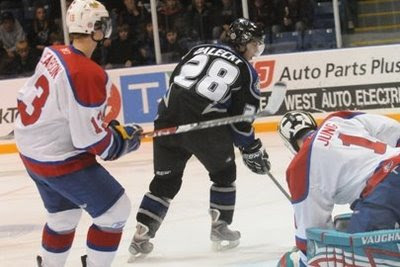 As for the Oil Kings, they lost in overtime in Swift Current. Edmonton climbed back in this one after trailing 2-1, only to have speedy creek win it in next goal wins time. However Edmonton gets a point, while Prince Albert lost, so the OK kids occupy 8th place alone, by one point with 6 games to go for each. Both clubs are in action Saturday against weaker teams. Edmonton is in the Jaw to face the Warriors, while the Raiders take on Red Deer.

It's funny how both teams under the Oilers umbrella are scrapping to get into the big dance. Three of the Kings 6 games are against the 2 worst teams in the East - 1 vs. MJ and a home and home series to end the season with RD - while the Oilers have 8 of their next 21 games against teams they lead by atleast 3 points in the west or are out of it in the East. They also play 6 games against the teams they are fighting for spots 7 and 8 (Minnesota, Anaheim, Nashville, Vancouver) I figure it's a coin toss whether the Oilers get in, while the Oil Kings have to just out preform one team down the stretch. It would be very cool to see double the playoff hockey in Edmonton after having none at the highest levels for 2 years.

And finally, you may have noticed Guy and I in our styling Hamilton Mustang Jerseys (top right of page) well now the producers of the jersey's from the best junior hockey movie ever made, Youngblood, have more gear from the flick.

Mad Brothers has added a Carl Racki #20 jersey to their roster, along with just about anything you can imagine from the movie slap shot. Check 'em out if you're a sweater collector like myself and tell 'em The Pipeline Show sent you.
Posted by Dean Millard @ 1:42 AM

Thanks for showing those stylin' jerseys from Youngblood.

awesome David, my #10 jersey is hanging up on my wall in my marsh, which is what I call my man room, seeing as my nickname is Duckman. They are wicked awesome and I can't wait to get my hands on a Carl Racki, or a Dwayne Hewitt #2 Mustangs sweater.