The NCAA Top 20 heading into action this past weekend and how the teams did:

Boston University now has an overall record of 23-5-2 while Notre Dame sports a 23-5-3 record making predicting this week's #1 ranked team pretty much a coin flip. I'm going to guess that the Terriers stay on top because they captured all but a single first place vote last week and the didn't lose this week (although a tie against lowly Maine might hurt them enough to drop to #2). 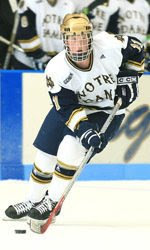 Now that I think about it, the way Notre Dame crushed Northern Michigan by 9-5 and 5-2 scores this weekend, I'd understand if they regained their top ranking. The Irish are supposed to be an uber-defensive squad but they scored at will against the Walt Kyle's Wildcats. Erik Condra (OTT) had five points on Firday while blueliner Ian Cole (STL) had 4 points including a pair of goals.

The #3 ranked team should become the Michigan Wolverines based on their 2-game sweep of Nebraska-Omaha combined with Northeastern's split against Massachusetts. The Wolverines won 8-3 and 4-2 with sophomore Aaron Palushaj (STL) picking up 5 points on Friday night alone. Interesting note that senior Billy Sauer got to play a bit on Friday and got the start on Saturday because Bryan Hogan was ill. Hogan started the Friday game but pulled himself because of how poor he felt.

The Vermont Catamounts were shocked by Merrimack on Friday night. Former Camrose Kodiak defender Karl Stollery (pictured) scored the first of 3 Warriors goals spaced just over 2 minutes apart in the second period which proved to be enough on the night. Vermont will slip a bit in the rankings because of the loss but probably not to the same extent that I expect Cornell to tumble.

The Big Red were swept on the weekend thanks to losses to #19 Dartmouth and unranked Harvard. Dartmouth stole a 5-4 overtime victory on Friday while the Crimson staked a 4-2 win on Saturday. Thanks to the success of teams previously ranked below them, I think it's possible that the Big Red might slide all the way out of the top 10 and settle around the #11 hole. Netminder Ben Scrivens is scheduled to be a guest on The Pipeline Show this coming Tuesday evening. 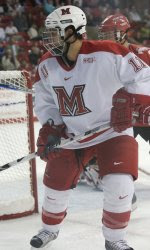 The RedHawks of Miami continue to soar and are unbeaten in their last 7 games. Enrico Blasi's is in second place in the CCHA standings and should up from #7 to #5 based on their play on the weekend. They've only allowed 8 goals against since thier last loss and have struck a toal of 29 times for goals of their own. Undersized and indrafted sophomore Carter Camper continues to pile up the stats in his NCAA career. Camper had 41 points in 33 games last year and has 36 in 29 games now this season.

Another team that is continuing its upwards surge through the rankings is Yale who are now riding a 9-game unbeaten streak and a stretch with only one loss in 14 games. The Bulldogs Union and RPI on the weekend and close out the regular schedule against Cornell, Clarkson, Colgate and St. Lawrence. They sit favorably in the pairwise rankings and seem like a good bet to qualify for the National tournament bracket. 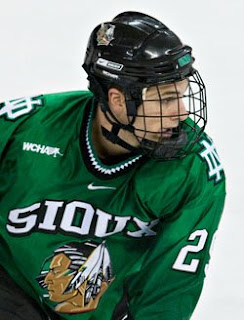 North Dakota added a couple more wins to their cause after dispatching Minnesota State-Mankato on Friday and Saturday night. The Fighting Sioux directed a 2-game total of 82 shots at goalie Mike Zacharias and junior Chris Vande Velde accounted for 3 points on the weekend. UND has Alaska-Anchorage, Colorado College and Wisconsin left on the regular season scheule - all 3 are teams below them in the rankings and in the WCHA standings but none should be considered automatic victories.

Boston College is struggling. The Eagles have 5 wins in their last 16 games and are in serious jeopardy of qualifying for the National tournament. Brock Bradford (BOS), is pulling his weight (or more than considering he's 5'10 and 170 lbs). The talented forward has 19 goals and 32 points but he's the only player on the roster to have broken the 10-goal plateau. Netminder John Muse had a .920 save percentage last year as a freshman but is stuck with a sub-.900 one this year - is it the team's futility or...? With 3 series left including Northeaster and New Hampshire ahead, nothing is going to be easy for BC this year. 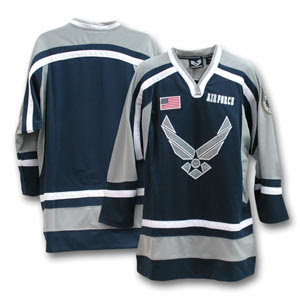 With their one-step-forward-one-step-back approach lately, Air Force is as good as done for the National tournament unless they can win the Atlantic Conference playoffs. The Falcons split with Bentley and now trail RIT in the Conference standings. The good news is that they still have RIT on the schedule, a seaosn ending series at the end of the month. The bad news is that Air Force is way back in the Pairwise rankings so they're pretty much going to have to win their way in for the National tournament.

Finally, with wins over Quinnipiac and #9 Princeton, the Saints of St. Lawrence probably get back into the Top 20 this week.

If I was to predict, and I will just for shits and giggles: