Jacques Gets First NHL Point... (and other signs of the apocalypse) 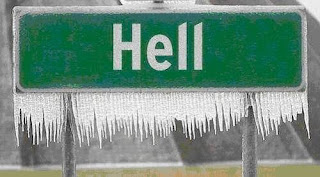 You knew it had to happen sooner or later but now you'll be able to answer the question: Where were you when J.F. Jacques recorded his first point in the NHL?

The big moment happened with exactly 3 minutes left in the opening period when Jacques redirected a point shot, with a clear highstick, and winger Liam Reddox tapped the rebound past Dallas netminder Marty Turco.

The play was reviewed before the goal was finally given the thumbs up from the officials both on and off the ice. It may have taken him 54 games to make a dent on the scoresheet but now he can rightfully claim to be on a 1-game hot streak!

Jacques played just 2:01 in the period.

This moment in history follows the first ever pro hockey goal by Oiler prospect Bryan Young who notched the game winner for the Springfield Falcons on Tuesday night. Earlier this season prospect Matt Glasser struck for a hat trick with the Denver Pioneers, Glasser has managed just 6 times in his previous two NCAA seasons combined.

The Pipeline Show will update as soon as we start seeing swarms of locusts or streets overflowing with frogs.
Posted by Guy Flaming @ 7:23 PM