Each week, International Scouting Services (ISS), Sports Management Worldwide (SMWW), Hockey Now, and The Pipeline Show recognize the Top Draft Eligible player from each of the WHL, OHL, QMJHL, & USHL leagues for the upcoming 2009 NHL Entry Draft based on their play over the course of the week. You can hear some of them Tuesday's on TPS. 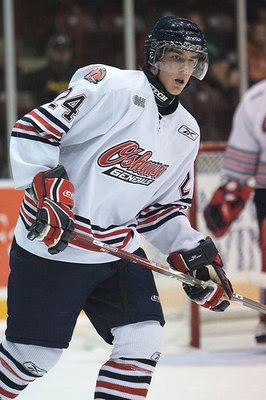 Ontario Hockey League – Calvin de Hann, Oshawa Generals
Calvin de Haan wins this week’s OHL award after posting 2 goals and 4 assists in 4 games for the Generals. de Haan, who assumed an a greater role on the Oshawa blueline after the departure of Michael Del Zotto, currently sits 7th amongst defensemen and 5th amongst rookies in scoring this season with 7 goals and 52 points. The native of Carp, ON logs a lot of minutes in all situations and is very confident with the puck on his stick.

Brayden Schenn picks up another award this week after notching 2 goals and adding 4 assists alongside a plus- 6 rating in 3 games. Schenn, a native of Saskatoon, SK has 28 goals and 60 points for Brandon, who currently sit third in the WHL’s Eastern Conference. Schenn has great hands and hockey sense as well as the ability to be physical when necessary. 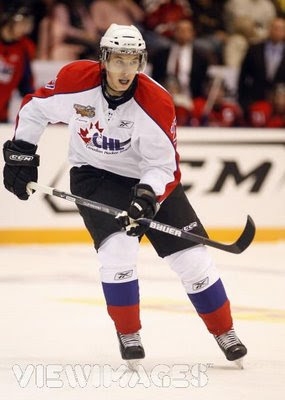 Jordan Caron (left at the Top Prospects Game) takes home another draft performer of the week award after recording 3 goals and 4 assists in 3 games for the Oceanic. Caron has 32 goals and 25 assists for 57 points in 49 games this season, his third with Rimouski. Caron is a player with good size who plays a well rounded two-way game. The Oceanic are hosting the 2009 Memorial Cup.

Philip Samuelsson wins his first award after putting up 5 assists and a plus- 3 rating in 3 games this week. 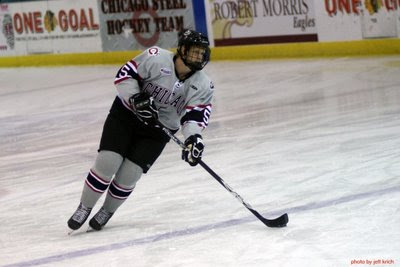 Samuelsson is currently in his rookie season in the USHL and has posted a solid 17 assists from the Chicago blueline. Samuelsson is known for his checking ability and a strong shot from the point. He's the son of former NHLer and current Coyotes assistant coach Ulf, and is property of the Edmonton Oil Kings of the WHL.