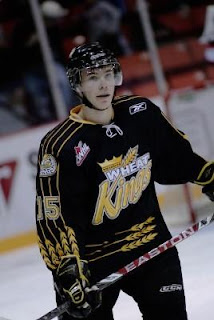 The term 'injury bug' just doesn't seem big enough to describe how significant the losses two WHL teams are going to have to overcome as a pair of key NHL draft eligible prospects will be out long term.

The Spokane Chiefs lost defenceman Jared Cowen with a serious knee injury during their game last Friday against the Chilliwack Bruins. The big 6'5 blueliner has been a stud for the Chiefs and his absence will be huge in the post season in a conference that includes Kelowna, Tri-City and the #2 ranked CHL team in the country, the Vancouver Giants.

UPDATE ON COWEN: Rod Petersen has the news that Cowen is out for the rest of the year and will undergo extensive surgery. read here for more. 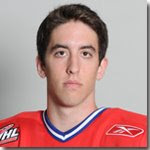 Joining Cowen on the sidelines will be Brandon Wheat Kings forward Scott Glennie who broke his elbow on the weekend while playing the Calgary Hitmen. Play-by-play voice of the Wheaties Bruce Luebke has more on that story here. That's an awfully tough, um... break, for the Wheat Kings who will need all of their top forwards for the postseason when they eventually have to face the likes of Saskatoon or the Hitmen again.

One key player who should soon be back in action is Oil Kings forward Tomas Vincour who has basically been out of the line up in Edmonton since leaving for the World Junior Championship in Ottawa before Christmas. Vincour returned from the tournament a bit banged up, played sparingly in 3 January games and has been out with a left shoulder injury since the 11th.

Having spoken with Vincour recently, it appears he should be back in as early as a week as he hopes to return in time to play in Kootenay against the Ice, a team Edmonton is trying to catch for one of the final playoff spots. The Oil Kings will need every offensive weapon they can muster if they hope to claw their way into at least 8th place. With 15 games left on the schedule, they'll only see Rexall Place 5 more times this season.
Posted by Guy Flaming @ 12:52 PM

Don't forget about the Kootenay Ice injury woes also. Not big names in major junior circles, but the loss of draft-eligible sniper Dustin Sylvester and #1 goalie Nathan Lieuwen are devastating to an already thin lineup.

good point R-Gib... thanks for chiming in.

I was at that Brandon-Calgary game and I don't remember Glennie leaving the ice injured at all. I do, however, remember him scoring two against us. :(