Oil Kings Tooned In, and who do the Oil call up?

Just back from the Blades/Oil Kings game, and for the second straight night Edmonton's downfall was the 3rd period. Calgary scored 5 unanswered Tuesday night for a 6-2 win, while tonight it was Saskatoon putting up 5 in the final frame as the Blades cut up the OK kids 7-1. The only consolation for Edmonton is that Calgary and Saskatoon are the top 2 teams in the Eastern Conference and are both ranked nationally.

The story in tonight's game was the Blades outshooting, outscoring, and out special teaming the home side. The shots were 12-1 Saskatoon after the first, and 31-20 overall. Saskatoon scored 3 times on the power play and notched 2 more while Edmonton had the man advantage. Torrie Jung, after getting his team to the dressing room in the first intermission with zero's on the board had an off night as the game wore on, but maybe it's a night off that he needs. He's started every game but 5 since joining the team in October. Edmonton drops to 10th in the East, but still tied points wise with Regina and Prince Albert for the 8th and final playoff spot. Saskatoon remains alone in 2nd place, 10 points back of Calgary and now 8 up on Brandon.

Scouting Report: I went to this one hoping to see several players from the Saskatoon Blades, some drafted some eligible this year, and one for next year. 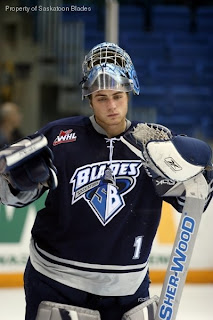 Goaltender Braden Holtby was a 4th round pick of the Washington Capitals last year, and his life story could be titled "flying under the radar" The pipeman was a 9th round pick in the bantam draft and didn't get a lot of hype heading into last year's draft, but has been excellent for Saskatoon this year. Holtby has good size at 6'1" and 200 lbs and was solid enough tonight on the few times that Edmonton tested him. Things could have been different at one point in the game, as after Oil King home captain Brendan Dowd beat Holtby with a screened long shot the shots were just 12-4. However his calm demeanor kept the goaltender and his team in the game as Edmonton was shut out on a 2 man advantage for 1:35 shortly after they got on the board. (Dean & Guy interviewed Holtby after the game, listen HERE).

Slovakian forward Milan Kytnar is an Oilers draft pick from 2007, but wasn't really noticeable tonight save for a couple of penalty minutes.

There were a number of local products to watch for in this one, and I'll start with the youngest. 15 year old D-man Duncan Siemens was called up from his AAA midget team in Sherwood Park tonight. It was Siemen's second game with the Blades, after skating with them in January. The 6'3" 192 lbs didn't really look out of place other than the full cage he was required to wear because of his age. Siemens' fresh off the AAA midget league's all star game, picked up his first WHL point on a power play blast that was tipped in by Walter Wintoneak in the 2nd period. Siemens also picked up a penalty, was +2, pinched a few times and took the body as well. While he did get caught on one pinch, his smooth skating ability allowed him to get back in the play before it hurt his team. Siemens isn't draft eligible until 2011, and ironically was the 2nd straight Sherwood Park bluelinder to be taken 3rd overall in the bantam draft when the Blades grabbed him last year. His good friend and opponent on this night, Mark Pysyk was drafted 3rd overall the year before by Edmonton. In 2011, Siemens has the potential to be a top 15 pick if his development keeps going at it`s current pace. (Postgame interview with Siemens HERE) 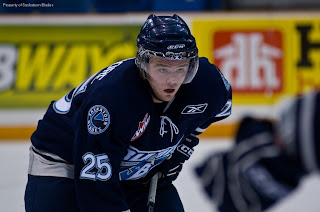 Burke Gallimore had a pretty big cheering section tonight, and while the Edmonton product didn`t get his name on the scoresheet he did create a few scoring chances. Saskatoon head coach Lorne Molleken told Guy and myself that the former Canadian Athletic Club AAA midget skater is the purest scorer the Blades have. His 21 goals and the same amount of assists in 54 games has the 6`0`` 200 pound RW ranke 106th in the January ISS report for the 2009 NHL draft. (Postgame with Gallimore HERE)

Travis Toomey is a 6`5`` 200 pound Centreman for the Blades who was passed over in last year`s NHL draft. His 2 goal, 1 assist, +2 night against the Kings though might have some of the scouts in attendance rethinking him. Toomey (pictured below) is from Leduc and had just 12 goals and 12 helpers in 72 games last year. He`s been limited to just 34 games this year due to injuries but has 15 goals and 10 assists when in the line up, including a pair of shorthanded goals. He scored one of his shorties tonight ripping one short side on Torrie Jung, to me it was the back breaker for the Oil Kings. (Postgame with Toomey HERE) 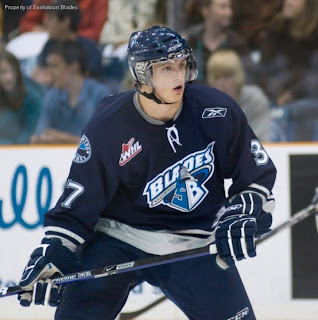 I was also impressed with 16 year old Josh Nicholls. The centreman is 6`2`` and 170 pounds and growing. He picked the pocket of Oil King rookie Kieran Friesen in the 3rd and notched his 8th goal of the season. The 2nd round bantam pick of the Blades in 2007 also set up another on this night giving him 22 points in 48 games. The youngster had 3 points in 6 games for Team Pacific at the World Under 17 championship this year. Nicholls seemed to find open ice and forced Torrie Jung to make some solid stops, and will be one guy I`ll be keeping my eyes on as the 2010 draft approaches.

After the game The Pipeline Show spoke with Blades head coach Lorne Molleken about the big win and also got scouting reports on several of the players listed above. (Listen Here)

Top 10 snub: The CHL`s national rankings came out today and I was pretty shocked not to see Spokane on the list. Windsor is still the top dog, while Calgary, Vancouver and Saskatoon are the only WHL teams on the list. 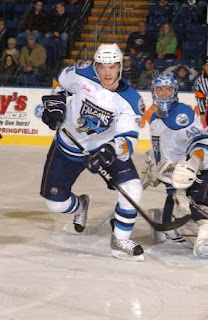 Who do the Oilers Call up? With Lubomir Visnovsky on the shelf with a dislocated shoulder you would think the team call somebody up for their impending stretch drive. Should that blueliner be Theo Peckham who leads all D-men in Springfield in socring with 19 points. Or is it Mathieu Roy`s turn to get another big league shot. My vote would be for rookie Taylor Chorney to get a crack with the big club. Sure Chorney has a big minus number at -21 but he`s the closest thing the Oilers have on the farm to what they lost when Visnovsky went down, although Roy does have a big shot. As for Chorney, sometimes players like him are better at the NHL level than the AHL as the game is faster and Chorney`s game is a skating one.

(All photos courtesy the Saskatoon Blades)
Posted by Dean Millard @ 1:05 AM