Daum's Debut Delayed, Stockton The Most MIserable City To Live in? 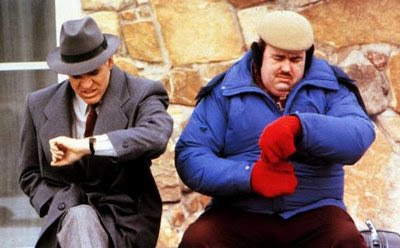 Last night we were joking around with new Springfield head coach Rob Daum about his travel plans to meet his new team in Manchester for tonight's game. We told Daum not to use the 'Trains, Planes, and Automobiles' method of getting there. 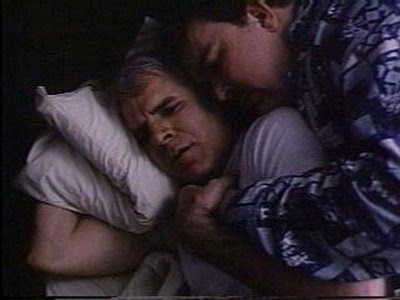 Daum replied that the flick is one of his favorites. I think Daum did his best John Candy/Steve Martin impression today, as due travel problems, he missed Springfields game with Manchester and his coaching debut will have to wait for Friday in Syracuse, minus Tim "Dr. Hook" McCracken.

As for tonight, after jumping out to a early 2-0 lead and chasing first round pick Jonathon Bernier from the net, the Falcons watched the LA Kings farmhands score 5 unanswered on route to a 5-2 Springfield loss. 2 Guys who were in big time slumps provided the scoring for Springfield, as Colin McDonald opened things up with just his 2nd goal in 33 games. Although it's his 2nd in 3 games, with a fight thrown in for good measure, so maybe the 2nd round pick from 2003 is about to get on a good streak. Also finding the scoresheet tonight was Slava Trukhno, who wasn't in as big a slump as McDonald, but he did notch his first in 11 games. However Teddy Purcell scored a pair and set up another, while former Brandon Wheat King Marty Murray had 2 helpers as the Monarchs stormed back. There were 2 scraps as Hans Benson dropped the mitts with Kevin Westgarth, while J.F. Jacques threw the skin hammers with Brian Boyle. Jacques also chipped in with an assist in his 4th game in Springfield. Jacques has about a week and a half left in his conditioning stint.

Some interesting line combos for the Birds courtesy of the team's website:

Looks like a promotion for Ryan O'Marra, and a demotion for Rob Schremp. It will be interesting to see how Rob Daum puts his line up together on Friday.

Is Stockton the most miserable place to live in all of the U.S.A? According to a Forbes report it is. High crime and unemployment rates as well as the housing bust are the reason for Forbes dumping on the home of the Oilers ECHL team the Thunder. Stockton has been miserable for the team at times this year as the Thunder sport a 9-11 mark. Ryan Huddy, son of Oilers assistant coach Charlie Huddy, leads the way for Stockton with 49 points in 46 games this year, and the Thunder are in the thick of a playoff race. Stockton has always been near the top when it comes to attendance, and it's no different this year as they lead the way averaging more than 6600 fans per game. That would be good enough to tie Chicago of the AHL for 5th in that league. I've always felt Stockton would make a great AHL city if the league ever wants to expand west, hopefully they can ride out the economic slump going on right now.

One final note, the Oilers owned Edmonton Oil Kings were shut out 3-0 in Kootenay tonight. couple that with a Prince Albert win and it means Edmonton is now 2 points out of 8th place and still 2 points up on Regina. Edmonton is in Tri City Friday, PA is home to Swift, while Regina heads to Moose Jaw.
Posted by Dean Millard @ 9:26 PM