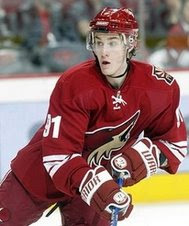 It's interesting that Turris goes down. Why now? Dean asked the Coyotes if they'd consider loaning him to Team Canada for the World Junior Championship and was told that wasn't even a consideration. Turris also said he hadn't thought of that possibility. Now, barely two months later Turris is sent to the farm?

Coyotes fans seem to think a trade is in the works, more because the fact Schlemko is coming up than because Turris is headed to the Rampage.

Ironic, as someone points out in that HF thread, is that Turris was expecting his girlfriend to arrive in Phoenix for a visit this weekend (see Here). "Happy Valentine's Day!"

I'm sure it's a temporary thing, a kick in the ass demotion, and that Turris will be back up with the big club sooner rather than later. It worked for the Oilers when they dispatched Robert Nilsson early on last year, but the time of year to normally do this would have been prior Christmas.

I still think Turris should have played for Canada at the WJC in Ottawa. He would have been playing at a high level in high pressure games, that would have been better as a kick start than some time riding the iron lung on the farm.
Posted by Guy Flaming @ 12:49 PM