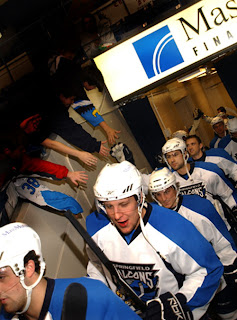 The Falcons struck six times on Tuesday night for an impressive 6-3 victory against the Portland Pirates (BUF) but lost one of their own in a scary incident. Forward Geoff Paukovich scored a goal but left the game after being taken out awkwardly into the end boards.

The former 2nd round pick of the Edmonton Oilers crashed heavily into the boards as he chased after a loose puck and was tripped up by Portland's Kenny MacAulay, who played for Stockton earlier this year.

I touched base with Paukovich this morning just to get a sense of the situation and he was pleased to report that the end result, although not perfect, is far from as ugly as it originally appeared.

"Just a strain thank God; it was pretty scary," he told me, "[I'm] going to try to start skating lightly tomorrow."

I asked him if he expected about a 2-week layoff which, as bad as that is, is a lot better than 4-6 weeks with a high ankle sprain.

"I think so," he guessed in regards to the time frame, "I'm just glad nothing was torn or broken."

Paukovich has played sparingly this season but is a +1 through his five appearances in February. With just 5 points and 23 PIMs to his credit though, next season he'll be looking to make more of an impact on the scoresheet. Paukovich's entry level contract expires at the end of the 2009-10 campaign and he'll become a RFA.

The Falcons are in action tonight as they host the Worcester Sharks (SJ). Springfield plays 3 games in 3 days this weekend as the action continues against Bridgeport (NYI) tomorrow and wraps up on Sunday in Providence (BOS) against the first place Bruins.
Posted by Guy Flaming @ 1:47 PM