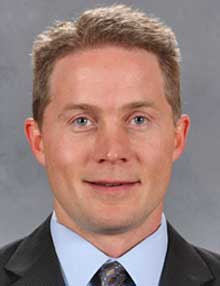 The Sens fired one former CHL coach in Craig Hartsburg today and replaced him with another in Clouston who had coached 7 years in Kootenay before taking the job of bench boss for Binghamton, the Senators farm club.

Clouston was named WHL coach of the year twice and given the nod as the top coach in the CHL in 2004-2005. Clouston was on the bench for Canada's gold medal performances in 2005 and 2006 at the World Under 18 Championship. As a player he won a national championship with the Golden Bears in 1991-1992.

The complete release can be found here.

Curtis Hunt who coached in Moose Jaw and Regina has been offered Clouston's old job in Binghamton.
Posted by Dean Millard @ 12:13 PM