Here was the NCAA Top 20 list heading into last week's crucial series of games and the end results for those teams: 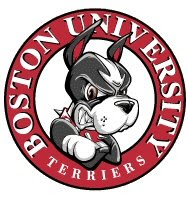 Well expect no movement at the top since the top four ranked teams all won their weekend series against weak opponents. The Terriers were actually down 3-0 on Friday night but stormed back with 6 unanswered goals including a hat trick by Jason Lawrence. Golaie Kieran Millan started the game but was yanked after allowing 3 goals on 8 shots. Millan was back between the pipes on Saturday as BU pounded Mass by a score of 7-2.

Jordan Pearce collected the shutout on Friday when the Fighting Irish blanked MSU 5-0. Notre Dame beat the Spartans again the next night but it was a much tighter 2-1 score. The Irish have captured the CCHA regular season title and will have the #1 seed heading into the conference playoffs which begin on March 13th.

The Michigan Wolverines end the regular schedule on a high and finish tied for 2nd in the conference with Miami. Both teams will have home ice advantage on the opening weekend of the playoffs. The Wolverines fired 79 shots at Ferris goalies on the weekend and they outscored the Bulldogs by a 10-1 margin.

Northeastern downed Mass-Lowell on Friday and Saturday. The Huskies are one point ahead of BU in the Hockey East standings with one weekend of regular season play to go. Northeastern will take on Boston College while the Terriers will face Providence. It should make for an interesting end to the schedule.

Denver's split with St. Cloud might hurt them but considering the two teams behind them also faltered on the weekend, they may actually stick in 5th. Kyle Ostrow had a pair of goals for the Pioneers on Friday but Saturday's hero was Ryan Lasch who had an assist and the overtime winner for St. Cloud.

It was a bad weekend for Princeton who dropped both games, against teams they should have beaten, and fell to 3rd in the ECAC standings. The top 4 teams in ECAC standings get a bi through the first weekend of the playoffs but you know coach Guy Gadowski would have liked home ice advantage in a potential championship game.

The Miami RedHawks were upset on Friday night by the Ohio State Buckeyes and that's the reason they end the season tied with Michigan in the CCHA standings. Kyle Reed had a hatty on Friday for the Buckeyes who should see a minor bump in the rankings from the 15 slot after earning a split with Miami. RedHawks Brian Kaufman and Justin Mercier both had a pair of goals in the second game, a 7-5 win for Miami.

Vermont got back on the winning track albeit barely as they just scraped past Maine in a pair of 1-goal victories. The Catamounts share 3rd place in Hockey East with New Hampshire so every point is critical here at the end of the year. For their part, the Wildcats also squeaked by a lesser opponent as they edged Merrimack on Friday 4-3 and then again on Saturday 1-0.

The Yale Bulldogs captured the ECAC crown as they doubled up on Cornell 4-2. The Bulldogs got a pair of goals from Brian O'Neill and three assists from Mark Arcobello in the big win. Yale also played Colgate on Sunday but the losing outcome has no bearing on the playoff match ups or conference standings so I suspect it won't hurt them much in the rankings.

14th ranked Duluth stumbled against Minnesota as they tied on Friday and lost the rematch the next night. The Gophers 3 times in the third period to overcome a 3-2 deficit and won the game 5-3 with goals from five different scorers. Saturday's victory was Minnesota's second in its last 10 outings but came at the right time against a team they are battling in the WCHA standings. Both club play a pair of games next weekend to endt he regular season - Minnesota is on the road against Michigan Tech while the Duluth Bulldogs host the Alaska-Anchorage Seawolves. 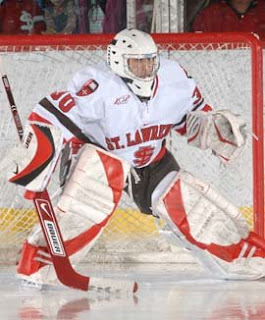 When it comes to teams ending the year on a roll it's tough to beat St. Lawrence who picked up two more wins this past weekend giving them just one loss in their last 11 contests. They were ranked 17th on Thursday but I won't be surprised if they bump up a couple spots giving the ECAC conference 4 teams in the top 15. Goalie Alex Petizian, a junior, had a pair of 31-save shutouts on the weekend giving him a .931 save percentage and 2.06 goals against average during the regular season.

Lastly, Air Force and RIT split their weekend series so the two programs end the year with identical 20-6-2 records in conference play. Tie breakers give the top seed to Air Force but obviously that won't matter until if/when they meet in the conference title game.