Top 5 Tuesday:Falcons and others who could be flying the coup next year

Today we take a look at 5 Oilers prospects who could be looking for another organization next season.

5. David Rohlfs
The Oilers drafted Rohlfs in the 5th round of the 2003 draft out of the North American Hockey League. In his draft year he scored 30 goals for 44 points in 53 games. Since then Rohlfs has a total of 51 goals in 6 seasons of hockey, 4 at Michigan State and the last 2 in Stockton, with 2 games in Springfield. . 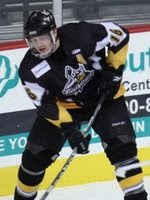 The intriguing aspects of Rohlfs are his versatility as both a forward and defenceman and his size at 6.03 and 215 pounds he should be a load to handle near the net, which you would think would lead to a few goals. Yet he has sniped just 4 times in 37 games with Stockton of the ECHL. Rohlfs joined Guy and I live in studio this past summer and spoke about hoping to spend the whole season in Springfield, you can hear the conversation which also included Geoff Paukovich (who could be on this list next year) here Rohlfs is an RFA next year and it's unlikely the team will make him a qualifying offer.

4.Glenn Fisher
He was signed to a minor league deal only last year and the Oilers will be cutting bait with Fisher at the end of the season. It was perfectly clear when the Oilers acquired Danny Sabourin and sent Fisher to Las Vegas of the ECHL that the Edmonton product wasn't in their plans anymore. Fisher played 4 years at Denver and is unfortnunately destined to be a career minor leaguer.

3. Danny Sabourin
The goaltender acquired along with Ryan Stone for Mathieu Garon has been pretty good for a Falcons team with it's head a few leagues under the sea right now. In his 5 games with Springfield, Sabourin has 2 wins, a 2.33 gaa and a save percentage of .925. But the Oilers had to many goalies before they picked him up and as we saw in Edmonton this year a crowded crease is an unhappy one. The Oilers would also test the waters with soon to be 30 year old Bjorn Bjurling who is having a pretty good year in the SEL. 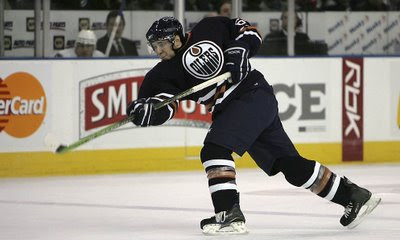 2. Sebastien Bisaillon
He once scored 35 goals from the blueline and was an emergency call up for the Oilers in 2006-07 when everyone under the sun was injured and they couldn't bring anyone from the farm up to the big club. Bisaillon has a booming shot from the point but he's been joining Lerg to many times in the press box as a healthy scratch. He was sent to Stockton Monday for the 2nd time this season and the defence position is one of strength for the Oilers, especially if Joseph Hrabl returns and or Jeff Petry decides to leave school early next year.

1. Stephane Goulet
This is the player I am most certain won't be offered another contract from the Oilers. He was sat for 8 straight game earlier this year in Springfield and has just a single goal in the 18 games he has suited up in. The Oilers drafted Goulet in the 7th round of the 2004 draft, and he did score 51 goals with Moncton in 05-06, the year the Wildcats lost to Quebec in the Memorial Cup final.

So there are 5 who I think won't be offered a second contract next season. There are a few bubble players like Colin McDonald. However I spoke to someone with the Oilers today who said MacDonald is playing better as of late and settling into a checking role. Bryan Young is another RFA next year, but Young plays a pretty simple, solid game and fills they physical role as well. Mathieu Roy is another blueliner who could be cut lose by the club, simply because he can't seem to stay healthy at the NHL level. But when he's not hurt he plays fairly decent.

Agree or disagree with any of they players listed, feel free to chime in. Or you can pipe up tonight on TPS . This evening we'll welcome UND junior and Oilers prospect Chris Vande Velde, as well as ISS head scout Mike Oke, 2008 first overall selection Steven Stamkos and much more. 7-9 PM MST on The TEAM 1260 in Edmonton, and heard around the world at http://www.cfrn.com/player/player
Posted by Dean Millard @ 11:43 PM

I may be reading you wrong here, but Bryan Lerg is under contract for next season, and likely not a candidate to fly the "coup"

You are correct, the info I was using said Lerg was signed to a one year deal, but the official release says two. Thanks for catching that.