Here's what the NCAA Top 20 looked like heading into action this past Friday and the brief results for each of the ranked teams: 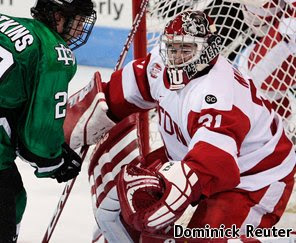 I don't anticipate any movement from the top 4 teams of last week's poll simply for the fact that none of them lost. True BU and Northeastern only played once but they have a HUGE game against each other on Monday night as they battle for the Beanpot title. #1 against #3 in that monumental clash - it should be a wickedly entertaining game. It features two netminders having terrrific seasons in Junior Brad Thiessen for the Huskies and sophomore Kieran Millan of the BU Terriers. The Pipeline Show is thrilled to announce that we'll be speaking with Millan, an Edmonton native, on the air this Tuesday - the night after the big game.

I believe that both Cornell and Denver will slip because the Catamounts of Vermont will leapfrog them on the strength of their series sweep of Providence. The RedHawks were idle so I'm not sure that The Big Red or the Pioneers will slide more than one ladder rung each. Vermont is a bit lost in the Hockey East shadow of BU and Northeastern but I wouldn't want to face them in the National Tournament - they've already beaten the Terriers (twice) and the Huskies so confidence won't be an issue.

The wheels are coming off in Minnesota as the always tough Golden Gophers have now dropped 6 of their last 8 games including the last 4 straight. Wisconsin continues to forge ahead after a dreadful start to the year and while I expect the Gophers to drop to 11th or 12th, the Badgers should surge right up to them, if not just ahead.

Princeton's win over Cornell will help them up the ladder a bit but I don't know if they'll move all that much. The Tigers do have a loss to Cornell from early this year so a jump from 11th to 9th or 10th might be all Princeton gets this week.

The team that is on the move in my mind is Yale. The Bulldogs continue to roll having picked up wins this weekend against Harvard and Dartmouth and increasing their win streak to 6 games. Yale has lost only once in their last 12 contests.

There was another ugly incident in NCAA hockey this past weekend during the Firday game between Notre Dame and Ohio State. A Buckeyes freshman by the name of Ian Boots was given 5 and a game for spearing Irish blueliner Ian Cole late in the third period. Cole, property of the St. Louis Blues, would eventually factor in on a late tying goal that put Notre Dame in a position to win it in overtime. Boots will automatically miss Sunday's game because of his ejection.
Posted by Guy Flaming @ 2:13 AM