Tavares tops 200 as the Knights edge the Rangers in O.T.

Just finished watching the London Knights/Kitchener Rangers tilt on Rogers Sportsnet with TPS favorites Peter Loubardias and Sam Cosentino calling the game and it was a beauty. 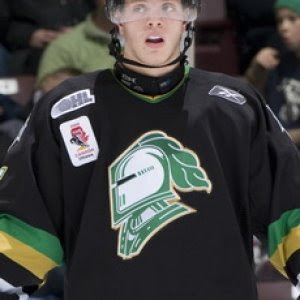 John Tavares won it for London in overtime with his 200th career goal and 43rd this season, it was a power play goal. I haven't watched many Windsor games, and I know they have supreme talent and a massive lead in the standings, but I'm wondering out loud if they'll be able to beat the Knights in the playoffs, especially if London gets a wack of power play time. Sure London has struggled somewhat lately with just 4 wins in their past 10 but I mean when you can throw out Tavares, Nazim Kadri, Michael Del Zotto, John Carlson,(pictured) Phillip McCrae or Justin Taylor on the power play it's deadly. They have 367 points between them, and 54 goals with the man advantage, heck the super 6 have 17 shorthanded goals this year. Carlson has a cannon of a shot, can sneak down low and dish the puck, making him the perfect pp quarterback. The League's 2nd leading rookie scorer and Washington Capitals prospect will join us Tuesday on TPS, click here to find out who else will be on the show.

Having said all that, the guy I might have been the most impressed with was Kitchener's Jeff Skinner. A guy who will be a high end pick in the 2010 draft is 4th on team scoring with 41 points in 51 games, including 22 goals. He's also plus 5 on a team 5 games below 500. Skinner is 10th in rookie scoring as a 16 year old and showed a never quit attitude during the game, especially on the game tying goal in which he fired 2 shots on net before wrapping it around to send it to overtime. Skinner also added an assist, a penalty minute and was plus 1 in the loss.
Posted by Dean Millard @ 7:33 PM

Interesting blog as for me. It would be great to read more concerning this matter. Thank you for giving that material.
Sexy Lady
Asian escorts London