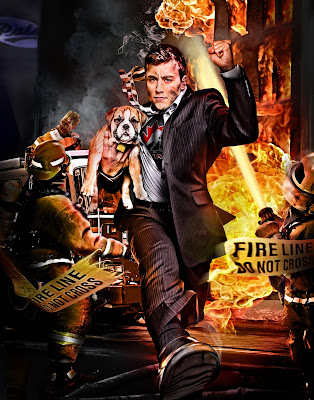 This wickedly cool poster is available to fans attending the Regina Pats game tomorrow. TPS buddy Rod Pedersen has the details here, I just think the poster is fantastic.

I know many Edmonton fans are already expecting Eberle to be an incoming hero for the Oilers but this might be taking it a bit too far! It's tongue in cheek I'm sure, I'm just hoping that (a) Oiler fans don't start piling up their expectations to Schremp-like proportions and (b) Colten Teubert's head doesn't explode.

(a bit of an inside joke there about Colten "The Punisher" Teubert.)

The Pats are going to need a heroic effort from Eberle and the rest of the roster as well as they are currently 10th in the WHL's Eastern Conference standings, 4 points back of the Oil Kings and 6 behind Prince Albert who currently hold down the 8th and final playoff spot. In Regina's favor - 2 games in hand on both Edmonton and P.A.

Eberle is 28th in league scoring with 58 points, including 30 goals, in 49 games. The Canadian WJC hero has points in 5 of 6 February games but is also an ugly -8 combined in his last three outings.

As Greg Harder recently pointed out, Eberle did hit the 100-goal plateau with a goal against the Calgary Hitmen last weekend.
Posted by Guy Flaming @ 1:43 PM