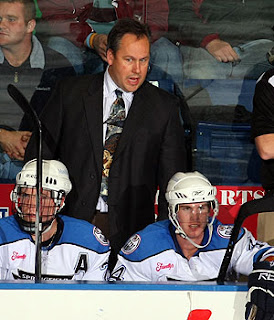 A few days have passed since the coaching change was made in Springfield that saw Jeff Truitt replaced by Rob Daum. Since that time I've had the chance to speak with a small number of Falcons players for some reaction and have gotten pretty much the same feelings in response from all of them - regret and guilt.

On Tuesday I chatted for a few minutes with center Ryan O'Marra who, despite his place down the depth chart (when not a healthy scratch), had nothing but positive things to say in regards to Truitt. O'Marra described Truitt as a player's coach and made it clear that even though the team has struggled mightily for the last couple of months, there was no dissention and that the coach had not lost the room.

That was pretty much the same story we received from Rob Schremp during his appearance on The Pipeline Show in January.

On Tuesday night we spoke with Ryan Stone, an interview that was set up before the coaching change was made, and he described the team's reaction as being "pretty upset over it because it's usually never the coach's fault."

Stone went on to say that the team "let [Truitt] down and he took the fall for it." 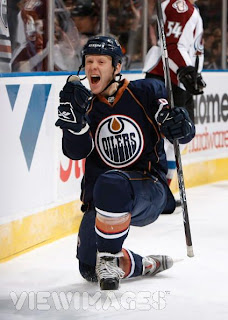 Yesterday morning I had a casual conversation with Liam Reddox at the Oilers morning skate. I asked Reddox if it was fair to say that Truitt was indeed liked by everyone and that he felt the Falcons coach was 'a player's coach'. Reddox echoed what O'Marra had told me in that Truitt had the respect of all of the players and that the team was taking responsibility for the poor play upon themselves rather than looking to pass blame to the coaches.

I asked Reddox if he was suprised that Truitt was let go considering all of those things and he spelled it out as plainly as it can be said - that it's a results driven business and the team wasn't getting the results. The old cliche is that it's easier to fire the coach than to replace the entire roster and obviously that's true.

Reddox described Truitt as being incredibly dedicated to making the team better. Over the All-Star break when Reddox was back on the farm he said he would always show up early at the rink (as Reddox is known to do) and Truitt would be there before him going over video.

This really does appear to be a case of, as Ryan Stone described, the coach taking the fall for the team's lack of performance rather than because he himself isn't a good coach. The fact that some of the players are taking the firing to heart is a good thing - a kick in the ass is exactly the reason the move was made. It's just unfortunate that a good guy lost his job in the process.

With both Lubomir Visnovsky and Denis Grebeshkov out of action and both being contributors to the Oielrs power play, is there any chance that Mathieu Roy gets consideration for a recall? Corey Graham posed the question to me last night during the TEAM 1260 Post Game Show and while at first I sort of scoffed at the idea it actually does make a bit of sense - Roy does have some NHL experience and he does have a big shot from the point. He'd have to clear re-entry waivers but I'm really thinking that's not much of a concern for the Oilers who aren't likely considering resigning him this summer anyway. Theo Peckham is definitely on the way up but would it really be crazy to consider Roy as well? Speaking of Corey Graham, props to him for something he said last night in the press box. After watching Liam Reddox killing a penalty and winning a battle for a loose puck against two Canadiens along the wall right at the Oiler bench, Graham suggested that Reddox is starting to look more and more like he belongs. "He reminds me of Rudy" said Graham in reference to the movie about the Notre Dame football player who was told all his life he would never realize his dream but proved everyone wrong. I think you could make a case for Steve MacIntyre being Edmonton's Rudy but Reddox is starting to make believers out of more and more people too.

Really off topic for a second - so I'm in the dressing room yesterday morning and I happen to be wearing my Hamilton Mustangs T-Shirt (if you don't know who they are, shame on you). Of all the players who not only recognized it but struck up a conversation with me over it... Ladislav Smid was the last one I expected.

"Hey, nice!" he said pointing at the red logo, "That's a great movie!"

I wonder if Smid ever had tea with Miss McGill? I'll have to ask him next time.
Posted by Guy Flaming @ 1:22 PM