One on One: Matt D'Agostini 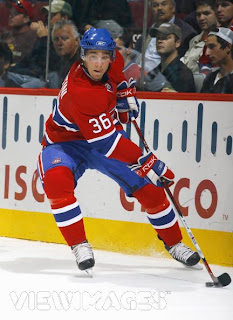 The Montreal Canadiens rolled through Alberta recently, a trip the Habs and their fans would like to forget as they were stomped by both Calgary and Edmonton. On the morning of the game against the Oilers I had a chance to speak with a couple Montreal rookies including Matt D'Agostini.

D'Agostini was a 6th round pick by Montreal back in 2005 (not 5th like I say in the interview) while he was a member of the OHL's Guleph Storm. In Guelph he played two seasons and put up solid points in both years. As a member of the Storm he played alongside Ryan Callahan (NYR), Ryan Parent (PHI) and a 15-year-old Drew Doughty (LA). 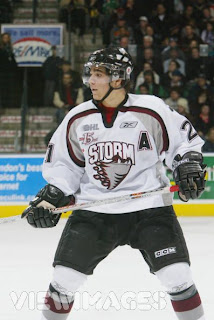 He's spent most of the last 3 seasons in the AHL with the Hamilton Bulldgos but with 16 points in 38 NHL games this year since being recalled, the farm might now be in his past for good. He help the Bulldogs with the Calder Cup in 2007 when he recorded 13 points in 22 playoff games.

We spoke about his season thus far, about being drafted by the Canadiens, whether or not he consider himself to be a late bloomer and I also asked him how much flak he's taken from his buddies back home in the Soo since becoming a Hab.

You can hear the entire interview HERE.
Posted by Guy Flaming @ 11:21 AM