It's come to my attention that Notre Dame will have a new head coach for it's Junior A team next year. Mike Vandeberghe is leaving the team at the end of the season. The former Brandon Wheat King D-man will help out with the University of Regina as well as help out with team Western for the U-17's. "Big Red" is also heading to Romania this spring to help coach the countries national team alongside former Brandon University Bobcat head coach Tom Skinner. This means in two years the Hounds will have a new coach for their Junior A team as well as AAA midget team after Dale Derkatch left to coach Regina of the WHL.

Speaking of "Joe Pesci" as some have dubbed Derkatch, someone asked me today through a text message if his job was in jeopardy because the Pats post Christmas slide. From what I've heard, G.M. Brent Parker is standing behind his man. But that has been the kiss of death for coaches in the past. 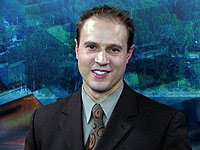 One final note, starting next week on this day, TPS will welcome CKPG TV sports director Allan Bristowe for the "Down-lo with Bristowe". Big Al will give us his take on the WHL's western conference and other items in the world of prospects. However we may have to rein Bristowe in if the P.A. Raiders beat out the Oil Kings for the 8th and final playoff spot, as Prince Albert is his home town. On the bright side, Bristowe is also cut from the goalie cloth so there will be more pipeman talk from The Pipeline Show. I'm very pleased to welcome my old Western Academy Broadcasting College buddy to "Coming Down The Pipe"
Posted by Dean Millard @ 11:37 AM