Springfield's win streak has ended just as it was getting started...literally. After doubling up Portland 6-3 Tuesday, they fell to Worcester 2-1 in overtime. Springfield grabbed a point for the second straight night though. Newly acquired Charles Linglet scored the only Falcons goal. The winger was picked up from Peoria, the farm club of the St. Louis Blues, in exchange for Carl Corazzini. Corazzini was signed in the off season to a minor league deal. 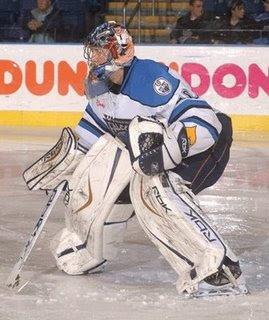 Devan Dubnyk was the games 2nd star and deservedly so, kicking out 35 saves with the game winner a deflection with under a minute to go in next goal wins time. Gilbert Brule sat this one out with an injury, as did Geoff Paukovich (See Guy's post below) You can hear Head Coach Rob Daum's post game comments courtesy of the Falcons website. Springfield is home to Bridgeport tomorrow and travel to Providence Sunday.

Meanwhile, apparently Guy was a little premature with his locust warning (again see below) as the assist J.F. Jacques looked to get last night on a Liam Reddox goal, has been taken away by the NHL. 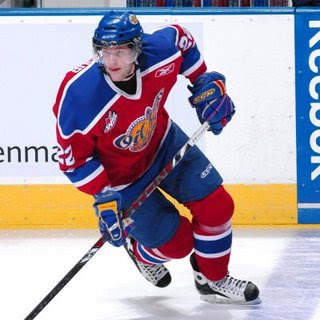 Vincour was playing just his 3rd game since January 11th due to an injury. P.G. pulled within 1 with 51 seconds to play, but the Kings held off a late rally. The same two teams will do it again tomorrow night in Big Al Bristowe's town. Prince Albert was idle so the OK kids are tied with the Raiders for the 8th and final playoff spot. Regina beat Moose Jaw on Rogers Sportsnet so the Pats are still 8 points back. 2 interesting things about the Pats, they gave away some really cool posters as Guy pointed out below and was shown on Global TV Friday, and Colton Teubert went off on fans in Regina. Check out Greg Harder's story. I hope this guy turns things around, because when he's good he can be a game changer with big hits. But it's his reputation that's taking a big hit right now. 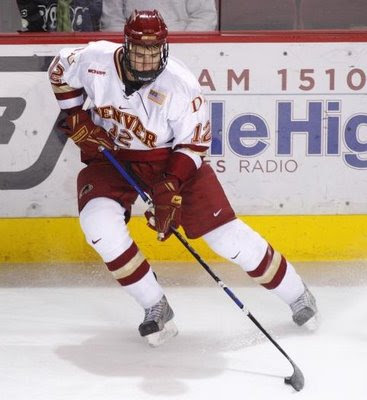 Also tonight former Camrose Kodiak Joe Colborne, who was once a guest blogger for TPS, came up extremely large for the Denver Pioneers tonight. The game was on the NHL network, and Colborne made sure it didn't end on time, scoring the tying goal with 15 seconds to go. The Pioneers won it the first minute into overtime. It's the second straight week Jumbo Joe has tied a contest as he salvaged a point against Colorado College last weekend. After a slow start with just 2 goals in his first 16 games, the Bruins first rounder has 3 in 2 games and 5 points in 4 February games. He has 26 points in 31 games overall, and if he can finish strong he might catch the eye of Team Canada for next year's World Junior Championship in Saskatoon and Regina.
Posted by Dean Millard @ 12:06 AM