Moore From The Pipeline - Part 1

Hello, my name Is John Moore and I am really excited to be keeping a blog in the upcoming months leading up to the draft. It’s my first experience with one so I’ll ask you to bear with me! 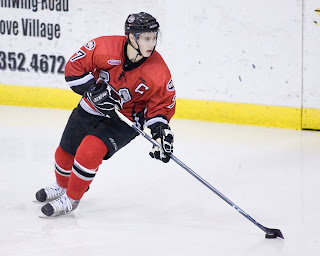 I am from Winnetka, Illinois, which is about 20 miles north of Chicago. I grew up playing for the Chicago Young Americans and then made the switch to the Chicago Mission for my bantam and midget years. With the Mission, I had the opportunity to play for Steve Smith, who played a couple of years in Edmonton. He was a great coach and our families remain close to this day. His son, Barron, recently had shoulder surgery and so he is back in town from Peterborough where he was playing for the Petes. Barron and I are going to meet up some time this week and go bowling which should be a good match now that he is reduced to one arm (I am absolutely brutal).

I play for the Chicago Steel in the USHL, and one of the benefits of this is that I live at home during my junior career. This year, I have two teammates living with me in Alex Simonson and Philip Samuelsson. It has been a tremendous experience living with these guys and I couldn’t ask for two better roommates.

This year for the Steel has been up and down. We are a young team that was a bit inconsistent in the beginning of the year. We are currently chasing the Waterloo Blackhawks for the fourth and final playoff spot in the east division. We trail them by just three points and are just taking things one day at a time, game to game. I’ve had a lot of fun this year though and love coming to the rink everyday.

Earlier this year, our captain Mike Walsh had season ending shoulder surgery and I was named captain. It was a tremendous honor to be named captain and it is a responsibility that I have enjoyed every minute of. One thing that I definitely need to work on is my pre-game speeches though. I’m a pretty quiet kid who sticks to himself and early on my speeches were a little rough, most of the guys would start giggling—they were that bad. I’ve come a long way in that department though and most of my teammates gave me the thumbs up when I appeared on The Pipeline Show earlier this month.

John Moore is ranked 17th overall by International Scouting Services (Feb '09) and 8th in North America by NHL Central Scouting (mid-term rankings). The 6'2 and 189 lbs defender currently has 13 goals and 33 points in 43 games this year with Chicago in the USHL. He recently made his first appearance on The Pipeline Show on February 10th.

(photos courtesy: The USHL and the Chicago Steel)

Just thought that I would drop you a line and say that my family and I enjoy going to The Edge and watching you and your teammates play with great heart and courage! You keep us on the EDGE of our seats! Keep up the great job and GO STEEL!!!!
R. Davila

It's been a lot of fun watching you this year, John. Mac also keeps things interesting on game days too! I'm looking forward to seeing where you end up in the draft this summer, and wish you all the best!