Last night on The Pipeline Show we began with the 2009 Draft Prospect Performers of the Week (see below) and then spoke with the top ranked defenceman available this June for the NHL entry draft (not named Hedman). Simon Despres of the Saint John Sea Dogs told us about his year and was blunt when asked how the team felt earlier this year when the management traded away two of their best players at the deadline. 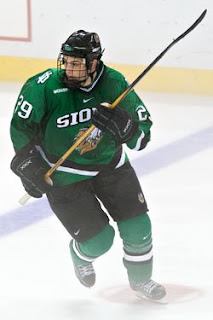 Oiler fans will be pleased to hear how well Chris Vande Velde has been playing as of late, picking up the WCHA Player of the Week award for the second consecutive week thanks to a recent hat trick. The Moorehead product talked about the team's struggles early on this year and how they've managed to turn things around for another strong finish, like every other year at UND. And speaking of an annual event, Vande Velde has been to the Frozen Four in both of his seasons with the sioux and we asked him if anything less this year would be considered a failure. Plus for the Oiler fans who only care to know when "Vandy" will turn pro - we asked, and he answered.

International Scouting Services has released their February rankings and that meant it was time for Mike Oke to make his return to the program. The head scout talked about a number of players including those down south with the USA U18 development program like Jeremy Morin, Drew Shore and a player The Pipeline Show is getting more and more interest in - Kyle Palmieri. From the U18 squad to the goalies for 2009, Oke was asked if it compared to last year where it was a strong crop that didn't look that way halfway through the season. Oke also gave us scouting reports of Swiss netminder Benjamin Conz as and Swede Robin Lehner.

Finally, John Moore has become a bit of a favorite for TPS and one scout recently told us that he felt the Chicago blueliner's skating is so impressive that "people would pay money just to see this kid do laps!" Did Oke agree?

Our final interview of the night was a scrum turned one-on-one that Dean had earlier in the day with Tampa Bay rookie Steven Stamkos. The budding star talked about his year thus far, the ups and downs, what it's like playing with guys like Vincent Lecavalier and then also gave us his predictions for the OHL playoffs this year. 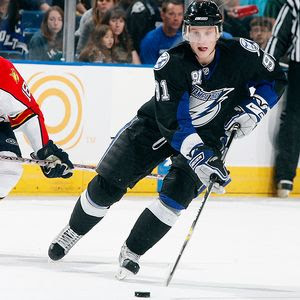 What didn't make it into the show last night was a couple of conversations that Dean had with Tampa Head Coach Rick Tocchet where he asked the bench boss about Stamkos as well as netminder Karri Ramo. Vincent Lecavalier also talked to Millard about Stamkos and, like always, had some interesting things to say.

If you missed it live, click the archive! The entire February 24th show can be found archived right HERE.
Posted by Guy Flaming @ 8:35 AM