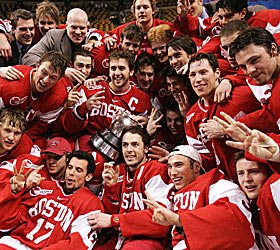 Maybe Northeastern should have started to decline power plays in the final of the Beanpot tournament in Boston Monday night. #1 ranked Boston University took out #3 ranked Northeastern 5-2 thanks to 3 shorthanded goals.

The Terriers earned their 29th Beanpot championship and prevented the Huskies from winning their first title in 21 years. BU was playing in the final for the 25th time in 27 years and won their 12 championship in the last 15 years.

BU netminder Kieren Milan, and Edmonton product stopped 23 shots, and he'll join Guy and myself Tuesday night on the show. You can hear it live from 7-9 PM mountain time on the TEAM 1260 in Edmonton, or online around the world at www.thepipelineshow.com.

The Beanpot tournament is one of the most prestigious events in all of NCAA hockey, and is for bragging rights between Boston's 4 major hockey schools. In the consolation game, Boston College edged Harvard 4-3.
Posted by Dean Millard @ 12:37 AM

Email ThisBlogThis!Share to TwitterShare to FacebookShare to Pinterest
Labels: Beanpot