Another close one for the Springfield Falcons Saturday night, but unfortunately they weren't playing horseshoes or handling hand grenades so "close" didn't cut it.

The Falcons lost 4-2 to the Binghamton Senators with another empty net goal to make it a 2 goal loss. On the bright side of the loss is the Falcons didn't get outshot, matching the Senators farm hands with 28 shots. 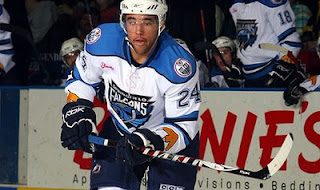 Theo Peckham's 6th and Brian Lerg's 9th paced the baby Oilers, while Gilbert Brule set up both goals giving him 18 goals in 23 games on the season. Peckham led the Falcons with 5 shots, while Slava Trukhno had a night to forget going -3. For the second straight night Springfield went 0 for on the power play, failing to score on 5 man advantage situations. The club has now gone 3 games without a power play goal, an 0-16 stretch.

Devan Dubnyk started again for Springfield making 24 saves as the birds wrapped up their 2 game road trip. Springfield will be home for 3 games in 3 days starting Friday, taking on Lowell, Hartford and once again Binghamton. Meanwhile the Stockton Thunder pulled out a 3-1 win over the Phoenix Road Runners Saturday night. Andrew Perugini was stellar for the Thunder, especially in the 3rd when he kicked out 17 of 18 Phoenix shots. 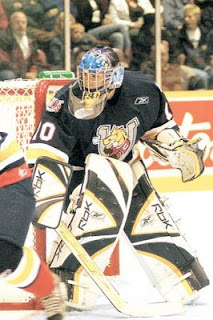 The free agent signing after Oilers training camp this fall made 32 saves in total for his 8th win of the season. The pipeman is red hot as of late with 5 straight wins, including a 38 save shut out in his last outing. This comes on the heels of 7 straight losses for the former Barrie Colt and Sarnia Sting.

The win keeps Stockton 2nd in the Pacific Division. The Thunder are home to Alaska on Wednesday.
Posted by Dean Millard @ 3:00 AM