The NCAA Top 20 heading into this past weekend's schedule and the team results:

Clearly if there was a theme to the weekend it was the numerous splits amongst the top 20. There will be some movement but it will be interesting to see how it all shakes down since the only 2 teams in the top 20 that won both of their weekend games were Miami and Yale. 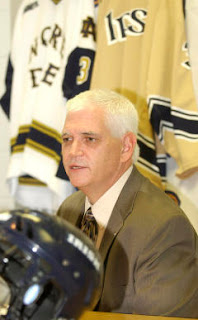 The marquee match of the weekend was #1 Notre Dame and #8 Michigan who were playing a home-and-home series. Interesting that the road team won both games with The Wolverines coming out on top Friday night with the Irish prevailing at Yost on Saturday. The Wolverines almost erased a 3-0 defecit on Saturday but their two power play markers in the third period fell short. It sounds a bit weird but I expect Michigan to move up a spot or two while I think the Irish might actually fall out of the #1 seed as a result of the series split. The 1-1 record will hurt Notre Dame more than Michigan who can at least argue that they beat the top ranked team in the country.

The other reason I think Notre Dame will be #2 when the new poll comes out is that Boston Univeristy won their only game of the weekend. The Terriers will kick off the Beanpot on Monday so only played once. It's dangerous to assume but I'm going to do so by suggesting they'll beat Harvard on Monday and take over as the #1 team in the NCAA.

Two teams are going to take big steps back I think, or at least the potential for a big fall is there. Cornell only managed to score one goal all weekend and it came during a 8-1 blowout at the hands of St. Lawrence on friday night. goalie Ben Scrivens was yanked at the midway point after allowing 4 goals on 23 shots but his replacement faired no better. Cornell and Clarkson played to a scoreless draw on Saturday. Bad news for the Big Red. 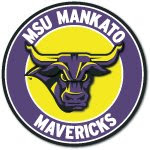 The Golden Gophers will also tumble from the #5 slot after getting swept by Mankato for the first time in their history. The Mavericks scored 5 times in the second period on Friday as they trounced their guests by a 6-2 margin. Saturday's tilt ended up as a 3-1 road win for Mankato who humbled the Gophers in their own barn in front of 10K fans.

The Denver Pioneers hammered Alaska-Anchorage on Friday to the tune of 6-2 but let one get away on Saturday as the Seawolves scored late to force overtime and then stole the win in the extra frame. The loss could hurt Denver enough to slip down around the #10 spot.

I'm not sure how much Miami's weekend sweep of Bowling Green will help them on the poll because of how bad the Falcons are but they should still move up. Considering everyone around them on the list either lost or split, you'd have to believe the RedHawks are going to move up at least a couple spots from #10.

One of the hottest teams going right now is Yale who beat both #9 Princeton and Quinnipiac. They entered the weekend ranked 18th but I expect they'll be top 15 and maybe higher when the votes come in. Sean Backman had a three point night in a 3-1 win over the Tigers on Friday. The Bulldogs have lost only once in their last 10 games and have now pulled equal with Cornell for top spot in the ECAC standings.

#15 Wisconsin and #16 Duluth traded wins, maybe we'll see them flipped on the next poll because the Badgers were at home so the road win is better for Duluth?

North Dakota came away with a split on the road against St. Cloud, Air Force went winless against Mercyhurst and Colorado College had the weekend off.

One unranked team that is actually St. Lawrence who have picked up 8 wins in their last 11 games including Friday's 8-1 pounding of Cornell and a 4-3 non-conference win over Vermont in December. They're still 6th in the ECAC but they have one of the top offences in the conference and are led by a group of seniors and juniors so they have lots of experience at the top. I don't think the Saints have a shot at the National Tournament though unless they can steal the Conference title to win their way in.

USCHO.com does a terrific job of breaking down who stands where in terms of qualifying for the year end 16-team bracket with a chance at becoing the National Champion. Jayson Moy's "Bracketology" gives me a headache every week but is worth the read as you try and figure out who has to do what in order to qualify. You can read the January 28th release here.
Posted by Guy Flaming @ 10:58 PM