One on One: Brenden Dowd 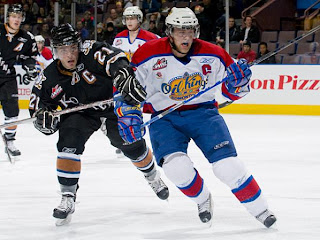 He's the team captain, leading goal scorer and top point getter but he's only got 7 more WHL games left in his career.

Brenden Dowd leads the Edmonton Oil Kings into action tonight as the club visits Swift Current for the first stage of a 2-game road trip. Edmonton enters the fray tied for the 8th and final playoff spot with the Prince Albert Raiders who are also in action tonight - in Medicine Hat.

The Pipeline Show caught up with Dowd after Wednesday night's home win over Red Deer, a conversation that you can hear HERE. 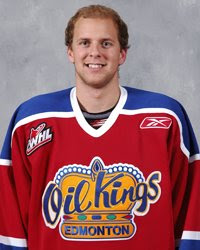 Dowd talks about everything from current events with the team, his feelings last year when he was picked up in the expansion draft, what may be in his future and of course whether or not he was going to get the Oil Kings into the post season.

The Saskatoon native leads Edmonton with 26 goals and 59 points and is red hot right now with 16 points in his last 14 games. He was originally property of the Kamloops Blazers before being snapped up by Bob Green in the expansion draft. His NHL rights are up for grabs so the unrestricted free agent is there for the taking but right now he's trying not to look too far ahead.

Dowd's hoping to add at least 4 playoff dates to his remaining WHL career.