For the first time in their 2-year existence the Edmonton Oil Kings were able to beat the Regina Pats and they did it in front of a record crowd of 13, 765 at Rexall Place.

It wasn't the most exciting WHL hockey game we've seen in Edmonton this year but the final 10 minutes or so was fairly memorable. I actually think that the fact the stand were three quarters full made the atmosphere so much better than even though the game wasn't a barn burner (until the end), it was more entertaining being there than in many of the games this season.

The game began rather slow as both teams struggled to get any shots on net; the teams had a pair each at the midway point of the opening frame.

Robin Soudek scored the only goal that counted tonight, a power play marker near the end of the first period.

The Oil Kings thought they might have added another in the third period after Regina goalie Linden Rowat (who was excellent in the final frame) clearly bumped the net from its moorings. Play continued for a handful of seconds during which time Soudek put the puck into the back of the goal. A brief officials scrum immediately took place and the goal was eventually waved off because the net was dislodged before the puck went in... but that's not what Edmonton coach Steve Pleau was arguing when he was told of the reasoning. You can hear from the coach in the post game audio I collected from Rexall tongiht by clicking HERE. 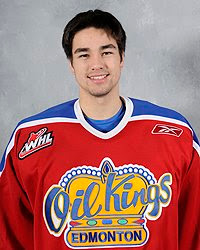 I was in charge of picking the 3 stars for the night and settled with Edmonton goalie Torrie Jung on top because he was simply fantastic at points in the contest. We really should stop being surprised because Jung is now firmly entrenched in the top 5 of goalies this year and trails only keepers on teams everyone considers to be championship contenders (which no one is saying about the Oil Kings). I'm not sure when they arrived but I was actually pleased to see that Jung has finally been able to ditch his teal-flavored Kelowna pads.

My second star was Linden Rowat who turned aside 26 shots including some goal mouth scrambles and point blank opportunities. The L.A. Kings prospect was really sharp but was still the second best goalie on the ice. 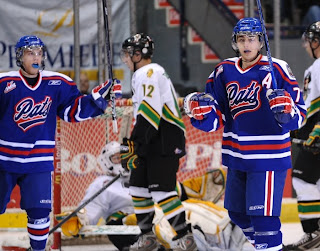 Lastly, on a night where Regina's top line was pretty well held in check, I gave my third star vote to defenceman Mark Pysyk. It was Pysyk who drew the responsibility of checking Jordan Eberle, Jordan Weal and Matt Robertson and outside of a two or three scoring chances, that line was nicely contained. (Weal and Eberle are pictured here against Prince Albert).

Next up for the Oil Kings is a Tuesday night road game in Calgary against the Hitmen, meaning no edition of The Pipeline Show this week, at least not live. We've got some stuff "in the can" which we're going to release on Tuesday though.

The next home date for Edmonton is Wednesday when another Oiler prospect returns to town. The Saskatoon Blades invade Rexall and bring Milan Kytnar along with them. 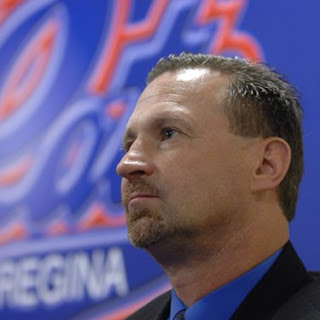 Notes: I had a chance to speak with a few key Pats before the game including coach Dale Derkatch. I asked the bench boss about two players in particular - Jordan Weal, who I am writing an upcoming feature on for Hockey's Future - and Colten Teubert who has been in the news lately for all of the wrong reasons. I found the coach's comments about the health of his dressing room to be surprisingly frank and gave an explanation that I wasn't expecting. You can hear what coach Derkatch had to say by clicking HERE.

Speaking of Teubert (pictured left)... the big blueliner has been a popular guest on TPS in the past beginning during the 2008 Top Prospects Game and again last fall during the mini-tournament in St. Albert. I asked Teubert about his golden experience at the WJC in Ottawa and everything that's gone on since then including getting scratched and his recent phone conversation with LA Kings GM Dean Lombardi. You can hear what Teubert had to say by clicking HERE. 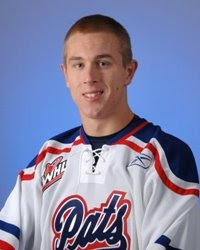 I also spoke with top rookie Jordan Weal in advance of a detailed feature which you'll be able to read in the near future at Hockey's Future. You can ehar the raw audio of that interview by clicking HERE.

Lastly, Jordan Eberle's media whirlwind tour has come to a close and I asked him after the game tongiht about how exhausting the attention has been. You can hear his comments HERE.

I overheard a couple of interesting things tonight too. One being that the announced crowd of over 10,000 a couple weeks ago for Military Night produced slightly over 7000 butts in the seats. It's unfortunate that something like 3500 people were no-shows because they missed a 8-1 performance by the home team.

Also, it sounds like the Oil Kings might be playing an exhibition game a little farther north next fall. I had my glass pressed to the wall and heard Barrhead is more than likely to receive the game that has been played in Leduc for the past couple of years. I do not know if the opponent has been determined yet. Nice to see the team take the show around a bit but... Barrhead's much farther away from my place than Leduc is so... THUMBS DOWN from me!
Posted by Guy Flaming @ 2:00 AM