One on One: Max Pacioretty 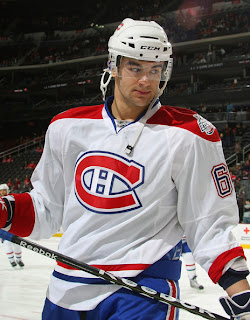 Earlier this month the Montreal Canadiens made a stop in Edmonton and were soundly beaten 7-2. That morning I had the chance to speak with rookie forward Max Pacioretty for an extended interview for online magazine Future Considerations.

The former 1st rounder has rocketed to the NHL after a single year in the USHL (Rookie of the Year) and another single season in the NCAA (CCHA Rookie of the Year). I asked him if his rapid success has surprised him.

The NHL freshman has 3 goals and 10 points thus far through 25 games and has played alongside a myriad of linemates including captain Saku Koivu.

We also talked about the rivalry between Michigan and Michigan State that boiled over this year when his former teammate and friend Steven Kampfer was attacked by a pair of Spartans. Making the story more complicated is that a fellow Canadiens prospect was one of the MSU players who went after Kampfer. You'll hear what Pacioretty had to say about the entire matter. 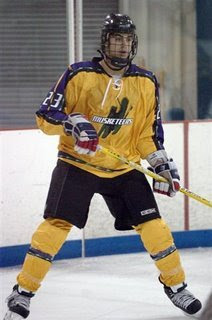 And does a boy from Connecticut playing for the Sioux City Musketeers have any idea what it means to be chosen by the Montreal Canadiens when he first hears his name called on draft day?

All that and more from Montreal's 'Max Pac' can be found in the archives at the website for The Pipeline Show or you can take the shortcut and click HERE.
Posted by Guy Flaming @ 10:52 AM

Hey it's a team effor, Millard's been almost pulling his weight and we've got a new guy coming on board named Allan Bristowe who's got more than a thumb on the WHL... more like a torso. He's about to break a story in the next day or two.

Plus with the Guest Player Blogs starting up again, we're hoping The Pipeline Show and Coming Down the Pipe! get noticed by more people than ever.

Clad you're enjoying it... tell your friends in cyberspace!