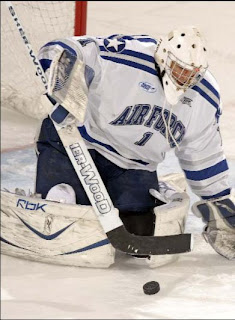 Well it certainly didn't take long for the NCAA National Tournament to produce a big upset. In the first game of the event the Michigan Wolverines were shutout and eliminated by Air Force as the Falcons scored a stunning 2-0 victory.

Everything about this game suggests the Wolverines were absolutely dominant. The shots were 43-13 for Michigan and they also controlled the dot winning 41 of 63 faceoffs.

So how did Air Force pull off the big upset?

You've heard The Pipeline Show talk about him before and like he's done before, Volkening was a one-man giant killer. This was Volkening's third consecutive shutout as he posted blankings in his final two AHA playoff games and now another against Red Berenson's mighty Wolverines squad. In fact, with shutouts against Michigan, Bentley and Mercyhurst behind him, Volkening hasn't allowed a goal since March 15th against Sacred Heart. One goal against in his last four games... that is quality goaltending. 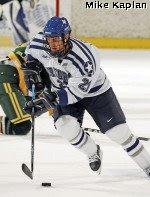 Jacques Lamoureux, another TPS favourite and past guest, scored the second goal for the Falcons helping show why he was named as one of the ten finalists for the Hobey Baker Award this year.

The Falcons opened the scoring on a first period power play, one of only 3 shots they mustered in the opneing frame. They scored again in the second period despite having only fired 7 shots at Michigan starter Bryan Hogan to that point.

Next up for Air Force, the winner between #3 Vermont and #2 Yale and quite frankly, I like the Falcons against either one of them.

Remember that at one point earlier this year Air Force was a perfect 13-0 before losing a close game against Denver. After that they went into a bit of a funk but the Falcons ended the year very strong and cruised through their Conference playoffs in impressive fashion.

Don't look now but... Air Force in the Frozen Four? It's one big step closer to reality after today's upset.
Posted by Guy Flaming @ 3:36 PM

Hey guys I read on here all the time and sometimes post. But I have started my own blog and I was hoping you guys could let this post it go through.And check it for yourself.
DuncansDeck@blogspot.com