With 11 games to go in Springfield and 7 to go (both entering play Saturday night) for Stockton, it seems as good a time as any to find out how the future is shaping up for the Oilers with their minor league teams.

In Springfield the overall stats don't paint a very good picture. Not one player is even close to being a point per game player. Only 3 who have played a decent amount of games are on the good side of the plus/minus rating - Ryan Stone +3, Stephane Goulet +2, and Jake Taylor +1 - Stone was a late season addition, Goulet has only played 18 games, and Taylor was injured for all but 28 contests this year. 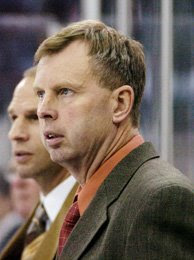 But for the sake of the future, let's take the last 18 games (heading into Saturday )into account, as that's when current head coach Rob Daum has been behind the bench. Since Daum took over, the birds are 5-9-4. They have picked up 6 points in their last 4 games, but that was after a 6 game losing skid where they were outscored 26-12 during the stretch.

As far as individuals go, the Falcons top 3 scorers this year, haven't exactly caught fire under Daum. Ryan Potulny leads the team in goals and points with 29 and 47 respectively and has just 11 points in 18 games since the coaching change. Ryan Stone is a little better with 14 points in 19 games. While Rob Schremp, who started with a 3 point game and 8 in the first 10 for his new coach, has just 11 in his last 18, and zero points in Springfield's last 4 games.

So who is benefiting from Daum behind the bench? Charles Linglett who Springfield traded Carl Corrazini for in February has 13 points in his last 14 games. The 6.02, 215 pound Montreal product has certainly agreed with his change of scenery and new coach. Linglett had just 9 points in 37 games with Peoria before the deal. D-man Taylor Chorney has 9 points in the 18 games with Daum calling the shots, and 6 points in the 8 games during the month of March, but he's also -4 in 18 games, adding to his team leading -25. Chorney's D partner since Daum replaced Jeff Truitt has been Cody Wild, and while his 6 points in 18 games are earth shattering, when you consider he had just 9 in 31 games before the change, you can see Wild is agreeing with Daum's coaching philosophy of getting his blueliners more active. 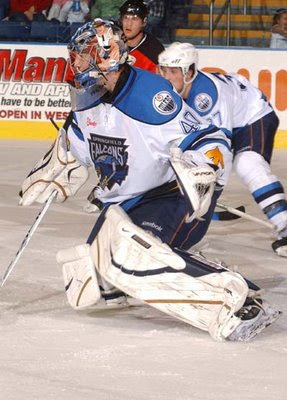 Maybe the biggest bright spot for Springfield this year - you might say the only one - is the play of Devan Dubnyk. The first round pick from 2004 has 17 of Springfield's 21 wins and has faced more than 1700 shots while earning a save percentage over 90.

As for Stockton, the Thunder are battling for a playoff spot in the Pacific division. Their top gun this year has been Ryan Huddy who has 29 goals and 66 points. Saturday night was Garet Hunt bobblehead night. The 6.0, 200 pound slugger has racked up 230 penalty minutes in 56 games, a number that leads the ECHL in his rookie season. Like the Falcons, Stockton has struggled to score goals, they're 19th out of 21 teams with just 190 goals, but they have received good goaltending from Andrew Perugini. The goaltender who earned a minor league contract after a great rookie and main camp with the Oilers, has 19 wins, a goals against average of 2.76 and a save percentage of .911 in 33 games. Numbers that might earn him a promotion to the AHL for next season.

So to review, both minor league teams can't seem to score but are bailed out more often than not by goaltenders. Is it a statement of how poor the Oilers prospects are? Or that the system is still a little green? I'd say a little of both, but it should be cause for concern for the Oilers brass.
Posted by Dean Millard @ 2:37 PM

Sorry, OT, but a fun tidbit; did you know Vincour's agent is Patrick Stefan?
He's now a player agent out in California according to Lebrun/ESPN.

cool, something we'll follow up with Vincour this week.