The Miami RedHawks may have been a #4 seed but they punched their ticket to the Frozen Four by beating #1 Denver and #2 Minnesota-Duluth this weekend. 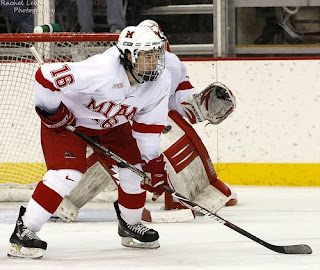 Justin Mericer's two goals were enough to get the RedHawks to Washington D.C. as the Bulldogs could only put one passed Miami netminder Cody Reichard in the 2-1 loss. The senior had a down season compared to last year but when the Colorado prospect needed to come through, he did.

Duluth goaltender Alex Stalock (SJ)only faced 19 shots but the pair of second period goals that beat him were enough. The Bulldogs struck for 26 shots of their own.

The Beavers' 5-1 demolition of heavily favored Notre Dame will go down in history as one of the biggest NCAA tournament upsets of all time. The now classic Holy Cross victory over Minnesota might be the exception. 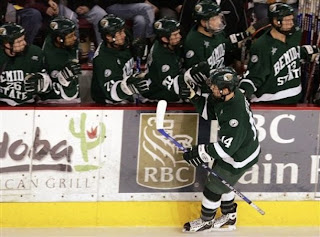 Tyler Scofield, of Prince George BC, led the Beavers with a pair of goals and an assist in the stunning romp over the Fighting Irish who, well, didn't put up much of a fight at all.

Notre Dame goaltender Jordan Pearce allowed 5 goals on 19 shots while his Bemidji counterpart, Matt Dalton, was only beaten once while facing 35 rubber bullets.

On the other half of the tournament bracket another Frozen Four spot was claimed, this time by the Catamounts of Vermont. Listen, The Pipeline Show doesn't think Vermont should have been one of the 16 teams in the tournament because they didn't show up in the Hockey East playoffs, and their presence in the Frozen Four just further cements our opinion that the system is flawed. 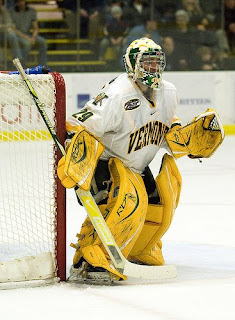 The story of the game was the awesome goaltending dual put on by Vermont's Rob Madore and Andrew Volkening between the pipes for the Falcons. Madore made 46 saves while Volkening stopped 32 shots.

The Catamounts thought they had scored the winner at the end of the first overtime period but a last second goal line save pushed the game to another period.

The loss ended Air Force's quest to be the first AHA team to reach the Frozen Four.

Sunday's games will complete the Frozen Four picture as heavily favored Boston University takes on Hockey East rival New Hampshire to go along with the clash between Cornell and Bemidji State. The Terriers did what the top seeds are supposed to do early on - they hammered the #4 seeded Ohio State Buckeyes to the tune of 8-3.

The bottom line: Only one #1 seed remains (Boston University) while all four #2 seeds have already been eliminated.

I guess maybe it paid to get swept early in the Conference tournaments - Vermont, New Hampshire and Miami are still alive after horrible loses two weeks ago.