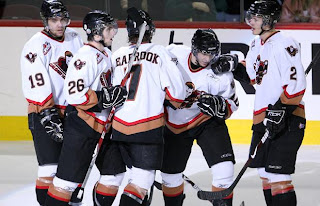 The Calgary Hitmen put an end to a successful second season for the Edmonton Oil Kings with a decisive 4-1 victory to win their opening WHL playoff series in 4 straight games.

Make no mistake about it, the Hitmen are an exceptional hockey club. They were without 100-point forward Brett Sonne on Wednesday night and didn't miss a beat firing 43 shots at Edmonton netminder Torrie Jung. Kris Foucault scored twice while Brandon Kozun and Kyle Bortis added singles in the clinching game in front of a lively crowd of 6387 at Rexall Place.

Edmonton's Brett Breitkreuz and Oil prospect Alex Plante had a spirited bout before the game was even two minutes old and that got the crowd into it early.

Edmonton was outshot in the opening period to the tune of 14-6 but most people on the catwalk thought those numbers were off a bit as the home side had played pretty strong. The Oil Kings opened the scoring after Robin Soudek slid a pass across the slot to a wide open Brent Raedeke (DET) for a power play goal.

For the next several minutes Edmonton had Calgary on their heels; Jeff Lee stepped up the physical play by throwing a trio of hits during one single shift including a pair which sent Hitmen flying. 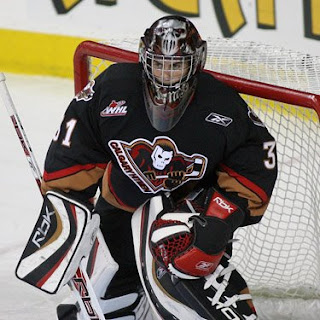 It was apparent early in the second though that Calgary wasn't going to be intimidated and they assumed control over the game in almost every facet. Goalie Martin Jones, the CHL stopper of the week, was sharp when needed and ended the series having allowed just 3 goals in 4 games.

Joel Broda was the point leader for the Hitmen over the series totalling 7 points.

Edmonton head coach Steve Pleau addressed the media after the game and spoke at length about what the short post season this year will mean to his team next season. He also paid tribute to the victorious Hitmen and made a variety of other comments that you can hear HERE. 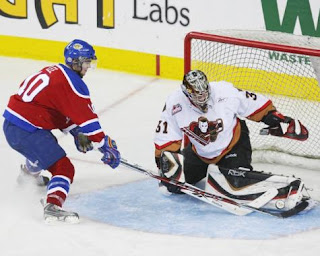 - This was the final WHL game in the careers of 20-year-old Oil Kings Brandon Lockerby, Brenden Dowd and Jeff Lee. I won't be shocked at all next year if Lockerby, a Manitoba native, is playing for the CIS Bisons and local product Jeff Lee is a member of the UofA Golden Bears. While I think Dowd could get a look from a pro team, he'd be a good fit for the Saskatchewan Huskies.

- The Oil Kings are playing host to the annual WHL Bantam Draft at the end of April. The league awards banquet and draft will take place on Wednesday the 29th and Thursday the 30th respectively. Edmonton will be hosting the event for the next three consecutive years.

- 19-year-old forward Shayne Neigum was a healthy scratch for game 4 after "violating a team rule". Neigum had been one of Edmonton's top performers through the first three games scoring one of their 3 goals but paid the price in the final game of the year. That's a really tough call for Steve Pleau who definitely could have used him but kudos to the coach for not deviating from the policy or making an exception based on the individual despite the team's need. Who says junior hockey teams only think about winning games?

- Finally, the winner of The Pipeline Show's Oil Kings contest for correctly predicting that Edmonton would only score a total of three goals in the opening round is... "RED DEER REBEL". The Oil Kings are in possession of the jersey and once I get it returned to me with everyone's signatures, we'll arrange transfer of ownership over to you. Congratulations and thanks to everyone else who entered. We had entries from as far away as Saskatoon and even one from Sweden!

Would that "violation of a team rule" have anything to do with the ten he was slapped with near the end of Game 3?

Well done Oil Kings, nothing but pride for this team.

Guy and Dean - are you guys going to do anything in the next few days/weeks building up towards the World U-18? Such as potential roster? Pysyk going??? Local kid Ryan Button???

@ Anonymous: Here at Coming Down the Pipe we will be for sure, not looking like we can squeeze any U18 into the show in the next 2 weeks though.

NCAA is front and center next week for one of the two hours and then out annual Frozen Four coach's show is on tap for the first Tuesday in April.

@ Doogie2K: That is the official statement from the team, beaking off at the officials and getting that 10-minutes at the end of the game.

@Guy: Makes sense; thanks. And good on the team if they have a specific rule against beaking off. There's pleading your case and there's being a dick, and I'm fine with teams clamping down on the latter while the guys are still young. My dad was a referee and he was never one to put up with nonsense when he worked.