The NCAA Conference Playoffs continued this weekend and here's what happened: 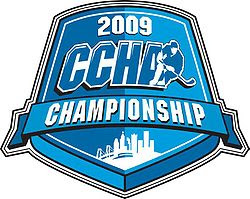 The CCHA Champion Notre Dame Fighting Irish made short work of Nebraska-Omaha by sweeping them in a pair of shutouts (5-0 and 1-0). netminder Jordan Pearce a combined total of 60 shots and turned aside each and every last one of them as he blanked the Mavericks to an early summer.

It was a similar dominating story with Michigan pounding Western Michigan by 5-2 and 6-1 scores to advance to the CCHA semi-finals next weekend. Aaron Palushaj scored a pair and added an assist on Saturday to go with his 3 helpers from Friday night. The Wolverines peppered goalie Riley Gill with 48 shots on Friday and 55 more on Saturday leaving him dotted like a golf ball in the process.

The other two series went the distance starting with Alaska-Fairbanks taking on Ohio State. The Buckeyes were shutout by Chad Johnson and the Nanooks in the opening game but came back in game two with a 4-2 victory. The third and deciding tilt on Sunday ended with a 1-0 score in favor of the host Nanooks. The Buckeyes are still hoping to capture an at-large bid for the NCAA tournament but this early exit isn't going to help their cause.

The big CCHA upset of the weekend came at the expense of the Miami Redhawks, the #8 ranked team in the nation, who fell at the hands of coach Walt Kyle's Northern Michigan Wildcats. Miami took game 1 by a narrow 3-2 score but it was the visitors who stole Game 2 in overtime to force a third meeting. Miami recorded 42 shots on goal in game 3 but Wildcats goalie Brian Stewart stopped all but one of them as his club won the game by a 3-1 margin.

Next weekend: Alaska Vs Michigan and Northern Michigan VS Notre Dame with all games being played in Detroit.

The CHA crowned their conference playoff champ on saturday after playing the semi-final single game elimination series on Friday night. Robert Morris upset Niagara on Friday by a 2-1 score while Bemidji State held off Alabama-Huntsville for a 4-1 win.

Saturday's final went to overtime and didn't end until Matt Read scored his second of the game, 4th of the weekend, giving Bemdji State the Conference title and automatic bid into the 16-team national tournament.

There were no upset series winners in the ECAC but there were a couple of teams that were definitely put to the test. St. Lawrence skated past Quinnipiac in a pair of 5-3 wins and Yale also breezed by Brown in a sweep.

However, the Princeton Tigers needed three tries to get past Union who suprised them with a 5-2 beating on Saturday. Princeton won the deciding game on Sunday by a 3-1 score with Lee jubinville and Brett Wilson collecting a goal and an assist each.

The Big Red of Cornell almost blew it big time. In a battle of former AJHL goalies, Allen York (Camrose Kodiaks) and R.P.I. shutout Cornell on Firday night. York stopped 32 shots that night while Ben Scrivens faced only 14 yet took the loss. Saturday the tables were turned and it was Cornell that scored a crushing 4-0 win and assaulted York with 56 shots while RPI managed only 9 of their own. Cornell had 18 power plays on the night and scored just twice with the man advantage.

Sunday's rubber match saw RPI comeback from a 4-1 defecit to make it close but eventual fall by a 4-3 score. Oilers prospect Riley Nash was awarded 3 assists in the game.

Next Weekend: Princeton vs Cornell and St.Lawrence vs Yale with all games being played in Albany N.Y.

4 of NCAA hockey's top 10 ranked teams come from Hockey East but that didn't mean they were immune to drama this weekend. Boston Universoty needed three games to get past Maine who shcoked the Terriers with a 6-3 upset on Saturday to force game 3. BU won the final game 6-2 but they dodged a bullet in the form of the Black Bears.

Not to be outdone, Northeastern was beaten 2-1 on Friday night by the Massachusetts Minutemen. The Huskies took game 2 with a 4-1 win but needed overtime in game 3 to salt away their opponents. Alex Tuckerman scored his second tally of the night to get Northeastern to teh next round.

Meanwhile, #7 ranked Vermont was swept by UMass-Lowell as the River Hawks eliminated the Catamounts by 4-3 (ot) and 4-2 scores. It was the third time in a month that UMass-Lowell has beaten Vermont.

New Hampshire was also ousted in 2 straight games thanks to 5-3 and 1-0 losses to Boston College. The defending National Champs know that the only way they're getting a chance to hold onto their crown is by winning the Hockey East title. The Eagles proved they still have some life in them as they sent James vanRiemsdyk and company packing, at least for a couple of weeks.

Next Weekend: Boston College vs Boston University and UMass-Lowell vs Northeastern with all games being played in Boston

Holy Cross and RIT scored 32 goals combined in their series which went the distance in what won't go down as a goaltender's duel. The Crusaders took game 1 with a 5-3 win but couldn't slow down the RIT attack on Saturday or Sunday. The teams traded goals back and forth on Saturday but RIT outlasted and took home a 6-4 win. On Sunday it was another offensive affair with the Tigers picking up a 9-5 victory despite being outshot 43-29.

Bentley and Canisius traded wins but it was the former that won the one that counted on Sunday. Jeff Gumaer's hat trick was enough for Bentley to move on to the next round.

The only series that didn't go the distance was Mercyhurst and Army where 6-2 and 5-0 scores ended the year for the Black Knights.

Air Force and Sacred Heart met in the final Atlantic series. The Falcons won on Friday but the Pionners scored a 4-1 win on Saturday and looked to be in position to pull of the upset. However, Air Force would show up and drop bombs on their opponent crusing to a 8-1 win on Sunday. Gregg Flynn and Jacques Lamoureux both had a pair of goals while Brent Olson recorded a hat trick in the romp.

Next Weekend: Mercyhurst vs RIT and Bentley vs Air Force with all games being played in Rochester, home for RIT.

5 series in the Western most Conference and not one of them went to 3 games.

The Wisconsin Badgers handed it to Mankato on Friday to the tune of 7-1 and followed that up with a 4-2 win the next night. Wisconsin fired a grand total of 111 shots at the Minnesota State net over the course of the two games. Defenceman Ryan McDonagh is scheduled to be a guest on The Pipeline Show on a special Monday night edition, March 16th.

The Golden Gophers looked rusty down the stretch bu were able to get past St. Cloud by scores of 4-2 and 3-0. Ryan Stoa, Jay Barriball, Jordan Schroeder and Cade Fairchild all had multiple point games for Minnesota while Garret Roe scored the only two goals of the series for the Huskies.

Alaska-Anchorage and Denver were seperated by a single goal in each of their games with the Pioneers coming out in both occasions. Edmonton native Jesse Martin scored the game winner on Friday capping off a 3-2 come from behind win that saw Denver trail 2-0 after the first period. Tyler Ruegsegger had a pair of goals in that one as well. The Boonetowners scored Saturday's game winner at the 19:12 mark off the stick of Luke Salazar.

The Fighting Sioux beat Michigan Tech 5-1 and 4-3 in their series sweep. Edmonton prospect Chris Vande Velde had two points on Friday and did the same again the next night. Former Hobey Baker winner and native Calgarian Ryan Duncan had 3 points on Saturday for North Dakota.

Finally, Minnesota-Duluth was the only road team to win a WCHA series as they beat Colorado College by 4-1 and 3-1 scores.

Next Weekend: First Minn-Duluth and Minnesota play off on Thursday in what they call the WCHA Play In game. The winner of that game will face North Dakota while Wisconsin battles Denver. All WCHA games will be in St. Paul Minnesota.


All of the Conference champions will be crowned next weekend which will help clear up the picture for the year end National Tournament bracket. For a handy schedule to the games next weekend, here's the USCHO.com list of games and times.
Posted by Guy Flaming @ 2:39 AM