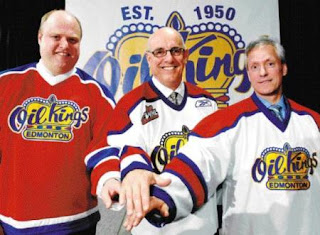 To help commemorate the first playoff season of the Edmonton Oil Kings, The Pipeline Show is giving away an XL Authentic Replica jersey autographed by the entire team. It's a white one like you see above and it was generously donated by the good folks over at The Sports Closest in Sherwood Park.

Contest Rules: All you have to do is email us with your prediction of how many goals Edmonton will score against the Calgary Hitmen in the entire opening series. We don't care about breaking it down by individual games, we're just looking for the grand total of Edmonton goals scored in Round 1.

How to Enter: Email us with your prediction at mailto:pipeup@thepipelineshow.com and be sure to include your full name, address, phone number and obviously an email address should already be attached. In the subject line of your email put "Oil Kings jersey contest"

That's it... deadline to enter is the opening puck drop of Game 1 and as always on our show, the earliest entry will win any tie breaker so don't delay - ENTER TODAY.

Here is the WHL's series breakdown for your convenience:

The Hitmen are making their 12th consecutive playoff appearance, and enter the post-season having enjoyed one of the most successful regular-season campaigns in WHL history. The Hitmen won an astounding 59 games, posted 122 points, and scored 330 goals. Their outstanding season was due in large part to their powerful and dynamic offense. The Hitmen boasted three players who scored 40 or more goals and nine players with 50 or more points. In addition, their power play clicked at over 30 percent efficiency. Calgary’s defense corps, led by Paul Postma, allowed the third-fewest number of goals in the League, and also produced a whopping 72 goals. Goaltender Martin Jones won 45 games in 55 appearances this season. 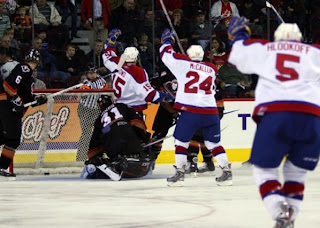 The Oil Kings booked their ticket to the post-season with a dramatic 2-1 overtime victory over the Prince Albert Raiders in a rare tiebreaker game after the teams finished tied on points for the final playoff berth in the Conference. Of all 16 playoff teams, the Oil Kings scored the second-fewest number of goals during the regular season. Only two players topped the 20-goal mark while only six Oil Kings managed to hit double digits in goals. Edmonton’s penalty killing unit ranked 15th in the WHL this season. They will need to be stronger on the PK to limit Calgary’s lethal power play. Goaltender Torrie Jung has the ability to be a game breaker, and usually plays his best in big games.

GOOD LUCK... 1 entry per email but you could enter more than once... we'll cap it at 3 entries per person. EDIT: this last sentence was poorly worded on my part and I apologize for the confusion. What I wanted from those who entered was their 3 choices so that if your first pick was already taken I could automatically alot you your second choice. I am in the process of contact you all individually in order that you entered, to fix the problem. What we ended up with was about 35 people picking the same 4 or 5 numbers... which obviously isn't what we wanted. Again, sorry for the confusion, it was my fault.

When did the WHL go to the 2-3-2 format? Is this a consistent thing, or just a first-round thing?

No it's simply because of rink availability in these 2 NHL rinks.