We started off with our opening face off debate. Guy and I took sides on whether the Oilers should have given up a first round pick for a top forward. Should Sam Gagner get the Robert Nilsson treatment of being a healthy scratch. Who the better 2010 draft eligible prospect is between Regina's Jordan Weal or Prince George's Brett Connolly. Should the NHL go to 1 minute power plays in overtime, an experiment the AHL has used this year, and finally who will come out on top if Calgary and Vancouver should meet in the WHL final. As I type this, I'm watching the Giants dismantle Tri City, however the Americans are without stud goaltender Chet Pickard because of a concussion. It also doesn't help when you score on yourself, as Americans D-men Brett Plouffe and Riley McIntosh did in the 2nd period of this one. Speaking of goals, if you didn't see the ridiculous performance from Medicine Hat Tigers forward Tyler Ennis on the weekend, go right now to the Tigers website and watch their plays of the week. The number one goal is one of the nicest individual efforts I've seen this year. 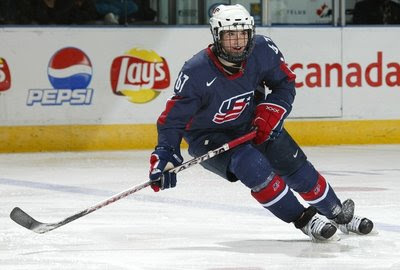 Our first guest last night was a rising prospect for the 2009 draft, Kyle Palmieri from the U.S. National development team. TPS has heard Zach Parise as a comparison from more than one scout, and it just so happens that he's from New Jersey. Where's he headed next year, check out the link below to find out.

From there we spoke with another potential draftee for this June. Phillip Samuelsson of the USHL's Chicago Steel. He's the son of Ulf and the property of the Edmonton Oil Kings, but it sounds like he's headed down the college route. Is Phillip a chip off the old block? (hopefully without the hit on Cam Neely) You can listen for yourself. 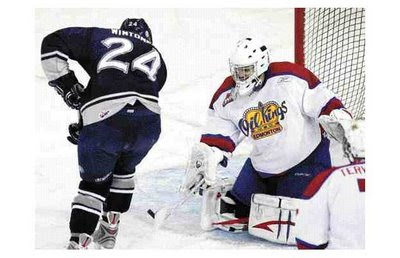 The top of the hour brought us the saving grace for the Edmonton Oil Kings. Goaltender Torrie Jung has been nothing short of spectacular for the 2nd year team and spoke about the current playoff run they are on. We also chatted with Jung about his future with Tampa Bay.

Bad Ass trivia was split with Guy's flaming hot/not and my fantasy pick up as well as few other notes about prospect hockey.

We then hit the AJHL thanks to Spruce Grove assistant coach Ryan Marsh. The Saints are one of top teams in the country and their captain is heading to New Hampshire. Spruce Grove earned a bye in the first round of the AJHL playoffs which began last weekend. Marsh also talked to us about The Hockey Program at Vimy Ridge Academy and Donnan Schools.

Finally, we had some bonus time last night before Corey Graham took over with the post game show, and had the chance to run and interview Guy and I did a while back with hall of fame forward Ron Francis.

You catch all the interviews listed above by heading to The Pipeline Show website.
Posted by Dean Millard @ 9:32 PM