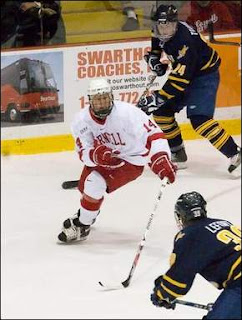 Everyone wants to know what Riley Nash is going to do next but they're going to have to wait a little while longer because... he doesn't know yet.

Look back at your life for a minute and when you do, try to reflect on the biggest decision you ever had to make? Regardless of the outcome - right or wrong, or good or bad... just what was the biggest, toughest, life altering choice you had to make? How old were you?

Your career choice? Your spouse? Your kids?

Riley Nash has come to the crossroads in his life and is facing the biggest decision he's had to make so far and perhaps ever will. At least that's the way he described it to me when I chatted with him on Monday afternoon.

As all Oiler fans know, Nash was drafted by the Edmonton Oilers back in 2007 with a 1st round pick they traded up to get. The organization gave up a lot to get that opportunity, the 30th and 36th overall picks went to Phoenix, and they've waited patiently for him to turn pro.


Now, it's my impression, that patience is wearing thin. They're not exactly head over heels in regards to his development so far at Cornell; he was listed as 6'1 and 173 lbs at the 2007 NHL Draft and now two years later he checks in as just 6 pounds heavier.

Cornell's late schedule meant that by the time Canada's World Junior camp took place in December, Nash had played just 12 games including a pair of pre-season exhibitions. By comparison, fellow Oiler prospects Jordan Eberle played 8 times in the two weeks leading up to the same camp and had 30 or so games already under his belt. One of them was cut and one of them made the final Canadian roster and sources tell TPS that coach Pat Quinn said it wasn't even close in regards to the game readiness of the NCAA players compared to their CHL counterparts.

The college route is supposed to provide so much more time for physical training yet the Oilers look at Nash and see a player who is physically older and more mature but only a handful of pounds bigger. Statistically speaking, Nash increased his scoring by a grand total of 3 points; 35 points up from 32 as a freshman. from Edmonton's perspective... what's the point of staying another season where he's (a) playing fewer games than they'd like (b) not developing as physically as they expected and (c) his statistical production appears to be stagnating?

But that's a hockey team's view of their asset so you can understand why things like scholastic advancement and a college degree don't weigh as heavily. 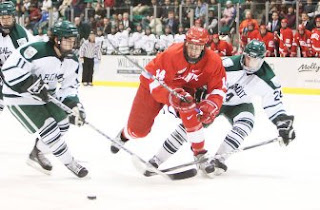 For Riley Nash though, he's trying to weigh several things all at once. He knows the Oilers really want him to leave school now just like he knows the business degree he's striving towards might not be as useful in a world where the economy is a growing concern. He knows people think he chose Cornell simply to play with his big brother, which he concedes was a factor but insists it's no longer the reason he might choose to stay another year (or more).

No, for Nash, this is a decision that isn't as simple as waiting for a roster spot to open up with the Oilers. Education is important to him and there is a sense of obligation at work here too in that Nash feels he owes Cornell both on and off the ice for taking him in the first place.

Oiler fans might say "dude... you're going to be a pro hockey player, who cares about the education when you'll be playing for millions of dollars??"

That's a scenario that isn't lost on Nash but nothing is guaranteed in this life and he wants to make sure that the timing is right on all fronts and not just with the Oilers. He himself isn't sure that he's ready for the pro game and told me in as many words that he thinks there are still things he can learn playing at the college level.

The problems is, the more he waits to turn pro the more his development could stall (if the NHL team's concerns are accurate). 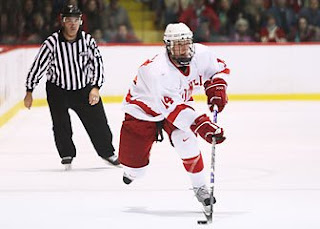 Nash has had discussions with his family advisor (agent for non-collegians) and is now trying to figure out what the best thing is for him to do. The Springfield Falcons only have 6 games left and they'll be done for the year after April 11th.

Having spoken with Nash I don't get the sense that he's going to make a snap decision and while no one has given him any kind of deadline to make up his mind, the 11th of April is 12 days away, and what would be the point of signing only to play one or two games?

If Nash hasn't turned pro by this weekend's 4-game stretch, what real motivation will there be for him to do so before next fall? 2 AHL games?

The Oilers and their fans might think that's enough but I don't know if Nash agrees. And it's his life.
Posted by Guy Flaming @ 3:00 AM