The ten finalists for the Hobey Baker Award were announced back on March 19th but the field will be narrowed down to the "Hobey Hat Trick" this coming Thursday April 2nd. Here now are my own personal top 5, they'll be different choices from many people I'm sure and there's no guarantee that even one of my five will be in the Hat Trick let alone the eventual 2009 Hobey Baker winner. I'd be interested to hear from those of you who are able to follow NCAA hockey more than we can up here, you tell us who the favorites should be.

Before I begin, here's a bit of the criteria that is considered by the 25-member selection committee: "Strength of character on and off the ice", "displaying outstanding skills in all phases of the game", "sportsmanship", and "Scholastic achievements". Keeping those in mind... 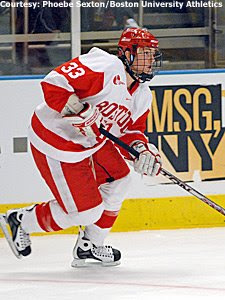 He's one of the most talented players in college hockey and has the individual stats and awards to prove it. He was drafted 7th overall by Nashville at the 2008 NHL Draft and there was a lot of talk that he would skip the rest of his college career and jump straight to the NHL. He chose instead to return for his sophomore season and went on to lead the Terriers in scoring with 52 points in 41 games... so far. He's picked up a bunch of individual Hockey East accolades and scpred 3 points in a 5-2 Bean Pot Final victory. His charity work revolves around 'Autism Speaks' and his major is History.

Wilson was a guest on The Pipeline Show in May of 2008.

Downside: No mention of scholastic achievement. 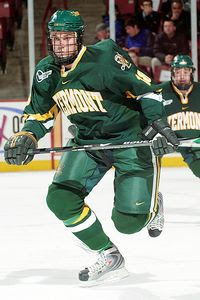 As far as I know, the Hobey Baker Award has never been one by a European player (wrong! see comments). Stalberg hails from Sweden and was drafted by the Toronto Maple Leafs in the 6th round back in 2006. He's wrapping up his junior season at Vermont and he was very productive this year scoring 24 goals and 45 points. Like Wilson, his season isn't quite done yet so he's got a chance to pad his stats and maybe capture a National Title in the process. Academically he's got a 3.6 GPA as a Business Administration major. I find it impressive that an import can succeed so well both at the rink and in the classroom.

Downside: No mention of charity work. 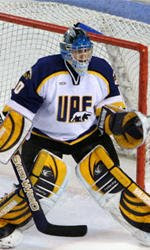 The only goalie to make my list is also the only Canadian. The former AJHL goalie was drafted by Pittsburgh in the 5th round of the 2006 draft and has now completed his NCAA career. Johnson recently signed with the Penguins. On the ice, Johnson's .939 save percentage was tops in the country and he had a 1.69 GAA and 6 shutouts to go along with it. The fact that his record is 14-14-5, coupled with those impressive stats, suggests a quality netminder on a team with little defence. Away from the rink Johnson volunteers with Habitat For Humanity. 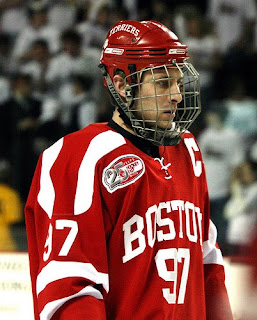 I'll admit I'm a sucker for an emotional story and Matt Gilroy's telling of why he wears #97 in honor of his deceased little brother... well it had me going. He's riding an ironman streak of +140 games and has the distinction of being the first player in Hockey East to be named a First Team player three times. Talk about character, this is a guy who paid his own way this year after the program gave his scholarship away because they were positive he was turning pro last summer! His charity work includes Autism Speaks and volunteer work at a Long Island summer basketball league.

Gilroy was a guest on The Pipeline Show on March 24th. 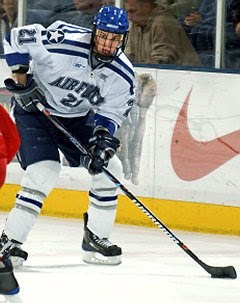 Like Gilroy, Lamoureux has a captivating back story as well. Long story short - he was deemed mentally unfit to join the military a few years ago as he fought inner demons that nearly led to his suicide. With help from family and his own inner will, Lamoureux has not only taken control of his personal life but he's giving back by visiting schools and speaking to kids about suicide and ways to survive life's problems. On the ice he's one of NCAA hockey's leading scorers with 53 points in 41 games - after missing a year because of a transfer from Northern Michigan! His family is drenched in hockey from his father, his twin sisters to his brothers including Jean-Philippe who was up for the Hobey last year as goalie for North Dakota.

Lamoureux was a guest on The Pipeline Show this past November 18th.

Downside: No mention of scholastic achievements aside from "completion of Combat Survival Training".

Peter Sejna won Hobey Baker in 2003, so Stålberg wouldn't be the first European to do so.

thanks... for some reason when I went through the list I went right over the name and didn't clue in that Sejna wasn't American.