Time now for another installment with TPS WHL western conference correspondent Allan Bristowe, who's the sports director at CKPG-TV in Prince George... 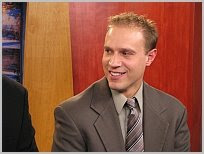 Most playoff bound teams want to get on a role heading into the playoffs. 4 of the 8 teams going to the post season have plenty to play for this weekend. Kelowna is on top of Spokane by a point for third in the Western Conference. Kamloops and Seattle are battling for 5th with the Blazers ahead by a point but the Thunderbirds do have a game in hand. The Rockets and Chiefs will have home ice advantage in the opening round.

If there are any upsets from the teams below them, they could have home ice advantage in the second round as well. The Blazers and Thunderbirds know they will meet either Kelowna or Spokane.

The Rockets are a team that could give Vancouver and Tri-City a run for the title in the West and Spokane just happens to be the defending Memorial Cup Champs. The Rockets and Blazers have a home and home starting in Kelowna on Friday. Kamloops will be looking for their first win in 7 tries against Kelowna this season. The Rockets complete the regular season against the Chiefs in Spokane on Sunday which could decide third. Spokane has the tougher schedule with a back to back set to start the weekend against Tri-City who’s clinched their second US regular season banner.

Seattle has the easier schedule in their fight for 5th with Kamloops. The T-Birds have a home and home with Portland and then finish up with Everett at home on Sunday. Both teams are behind them in the standings.

Kamloops has beat the league’s top two teams in the last two weeks; they trounced Calgary 5-1 and then on Wednesday night Justin Leclerc made 58 saves, 42 of them in the first two periods to knock off the number 3 team in the country the Vancouver Giants 3-1. It will all be decided by Sunday night.

That’s the Down-Low with Bristowe.
Posted by Dean Millard @ 12:27 PM