There were 22 trades yesterday before the official NHL deadline and a few of them involved prospects. Here's a recap of those specific deals.

To Toronto: Olaf Kolzig, Jamie Heward, Andy Rogers and a 4th Round Pick
To Tampa Bay: Richard Petiot
winner: none

I was part of the panel during the TEAM 1260's coverage of the deadline yesterday alongside Bryn Griffiths, Corey Graham, Jason Gregor, Robin Brownlee and Dan Barnes and it was the latter who had the best comment on this deal when he said "is Jamie Heward even in the league anymore?"

This deal initially looked so ridiculous that it took us a minute or two before we understood that it was a salary cap dump to allow the Lighting to fall under the bar so they could receive the gift cheque from the league.

For our purposes we'll look strictly at the two prospects involved. Andy Rogers is a former Calgary Hitman who was drafted in the 1st round (30th overall) back in 2004. He's a big guy at 6'5 but wasn't regarded as an overly physical player during his junior days. Your typical stay-at-home defenceman that for whatever reason just hasn't been able to take his game to the NHL yet despite the relativey weak franchise he was playing for. Will he get more of a chance with the Leafs?

In Richard Petiot the Lighting are receiving someone who is in much the same boat as Rogers - a promising prospect who has since not delivered. Petiot played for the Camrose Kodiaks before his 4-year NCAA career at Colorado College. The LA Kings drafted him in the 4th round (116th overall) in 2001 and 5 years later he made his NHL debut in California. His cup of coffee with the Kings lasted 2 games. Injuries have been a problem for Petiot as he missed almost all of the 2006-07 season with a torn knee tendon(s).

Watching the ticker from TSN while we were on the air, this deal threw me for a minute because they had listed 'Timhe Pehlmeh' or something like that and for the life of me I couldn't recall the name. Then I saw it was a goalie that San Jose was giving away and I put 2+2 together and came up with the actual name. 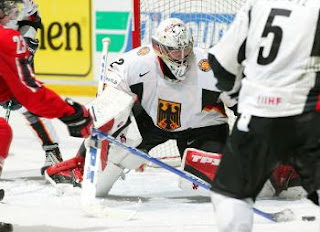 Good deal for both teams as San Jose adds toughness and grit as well as depth for their playoff run. Anaheim picks up two decent prospect and I'm not surprised that the Sharks would send out a goalie as I mentioned earlier this week that they have a glut of them. Timo Pielmeier has had a terrific QMJHL career since coming over from Germany; he's with Shawinigan this year and is one reason they are a legit Memorial Cup contender. Pielmeier played for Germany at the WJC in Ottawa this past Christmas as well and I think he's underated.

I'll admit that I had to look up Nick Bonino as I couldn't place the name initially but the sophomore forward of the BU Terriers is having a prett good year with 37 points in 33 games. He was taken in the 6th round by Tim Burke and the Sharks, an organization well repsected for their ability to find NCAA gems. Bonino is in year 2 at BU so time is on Anaheim's side.

again, one team adding a key puzzle piece for this year and the other getting decent youth in return. Looking at just the two prospects involved, Logan Stephenson is a former 2nd round pick of the Phoenix Coyotes who was good enough as a junior to tryout for Canada's WJC team but just hasn't progressed as a pro. He's yet to play a single NHL game and his 53 WHL points in Tri-City has not translated to any offence at the AHL level. 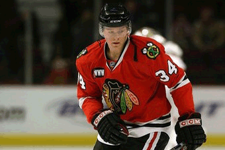 Anaheim does well here in adding Petri Kontiola who is probably good enough to be in the NHL right now but just can't find a place in Chicago. He's been pretty much a point per game player in the AHL over the last two years and picked up 5 points in 12 games with the Hawks last season. Hockey's Future ranked Kontiola as Chicago's 9th best prospect prior to the trade to Anaheim.

To Columbus: Kevin Lalande
To Calgary: 4th round pick
winner: Calgary GM Darryl Sutter makes out like The Lord of the Dance

As I mentioned earlier this week, I am a fan of the Columbus scouting staff and had the chance to speak often with GM Scott Howson while he was with the Oilers, I have a great deal of respect for much of the Blue Jackets brain trust. That said... I don't get this one AT ALL. 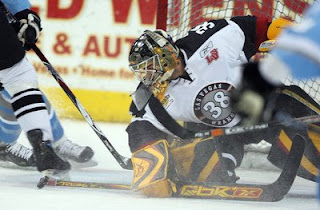 Kevin Lalande was an average OHL goalie who never had a season with a sub-3.00 goals against average as a starter in Belleville. His best year was when he was limited to just 30 appearances but he only had 15 wins for the Bulls that year. He's an undersized goalie at 5'11 and 180ish lbs. and has spent most of his pro career in Las Vegas with the Flames ECHL affiliate.

In Lalande's defence, anyone who knows me knows that I think Leland Iriving and Matt Keetley are two of the best goalie prospects out there so Lalande playing behind them is a given.

However, if I'm Columbus and I have Steve Mason, Wade Dubielewicz and Dan LaCosta under contract as well as Sebastian Dahm on the farm... why do I even need to bring in a goalie? If Mason needs more recovery time from the mono, clearly Lalande isn't going to fill in for him. If they are looking for a back up because Dubielieicz didn't impress with his 2 appearances so far... LaCosta is 2-0 in three appearances!

I don't get it and what makes this an even bigger steal for Calgary is the quality of pick they got back. If Bill Guerin is only getting the Islanders a 5th rounder and The Oilers couldn't give Danny Sabourin away on waivers... why the hell is an ECHL goalie like Lalande suddenly worth a 4th rounder??

To Anaheim: Erik Christensen
To Atlanta: Eric O'Dell
winner: Atlanta... because it fits their plan to rebuild

This swap is a bit confusing to me simply because the other moves Anaheim made were of the selling variety so if they're looking to rebuild... why move a guy you just drafted in the 2nd round? Eric O'Dell is a point per game player for the Sudbury Wolves this year and has 30 goals to his credit. HF already lists him in Atlanta's top 10 prospects and ahead of Angelo Esposito and Daultan Leveille.

Having already moved Eric Tangradi to Pittsburgh earlier, it's almost like the Ducks are flip flopping on what they should be doing; rebuilding with one deal while selling off parts of their future with the next.

No surprise that the Bruins parted ways with Matt Lashoff as his name had been bounced around like a hacky sack for the last couple months. Tampa does well here getting a pair of players that could possibly draw into their NHL roster for the rest of this season. 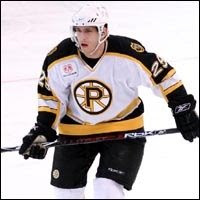 Lashoff is a former Kitchener Ranger and was a 1st round pick in 2005 while Martins Karsums went in the 2nd round the year before. Both have solid numbers in the AHL but haven't been able to crack a load Boston Bruins roster for more than spot duty as fill ins.

Lashoff apparently lost his window of opportunity to Matt Hunwick and Karsums (pictured) is expendable to the Bruins because they have a number of similar players (see smaller offensive talents) in their stable already like Brad Marchand and Zach Hamill.
----
And that pretty much sums up yesterday's events from a prospect perspective. Outside of the Blue Jackets puzzling move for Lalande and Anaheim's flip flopping strategy I think the moves made sense for the teams involved. Feel free to agree or disagree and if someone can explain the Columbus/Calgary deal from the Blue Jackets side... please do.
Posted by Guy Flaming @ 11:10 AM