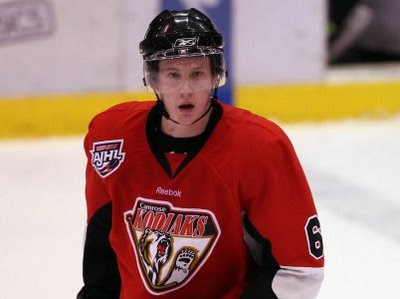 The Pipeline Show is pleased to welcome yet another guest blogger as we ramp up our draft countdown and coverage. Penning his thoughts will be Camrose Kodiak Defenceman Dylan Olsen who is ranked 34th by ISS for the upcoming draft. Look for his first entry in the next week.

The Calgary kid put up 10 goals and 29 points in 53 games this year for Camrose, his second season with the Kodiaks. 5 of his goals came on the power play and the 6.02, 205 pound rearguard picked up more than 120 penalty minutes. He also notched 7 points in 10 playoff games before Camrose was eliminated. Olsen has committed to the University of Minnesota-Duluth.

Olsen represented Team Canada West at the World Junior A Challenge in November, a tournament held in Camrose, and TPS has learned, Olsen will be picked to wear the Maple Leaf once again this Spring at the Under 18's in Fargo. Team Canada is meeting April 2nd in Minnesota to get ready for the tournament that starts April 9th.
Canada is the defending champions after blowing out Russia 8-0 in last year's final.

I'm not sure when Canada's roster will be officially released, but I'm wondering if Oil Kings blueliner Mark Pysyk will be on it. Sure he's only 16 but he was terrific this year for the Kings playing more than 20 minutes a night, steadying the back end and running the power play. He might not have the points of a Jordan Weal in Regina, but he was just as effective when it comes to first year players.
Posted by Dean Millard @ 1:09 PM

Hey guys. First off, love your blog. Secondly, do you have any insight on any other Junior A players across Canada that have a chance of making the team? Thanks

Thanks for the compliment, we try..atleast I do anyway, Guy, well let's not go there. Anyway, I don't see any other Junior A guys making the cut, as there aren't any ranked in the top 100 for the draft according to ISS. However one guy from the USHL might get consideration. Louis Leblanc is a Quebec kid who plays for Omaha, and was better than a point per game guy this year. He's a forward that is just outside the top 15 for this years draft.

I've got a list of potential U18 guys that I'm putting together and will hope to release tomorrow and there are 3 Jr.A names on it...

In your face Millard.