One on One: Zach Boychuk 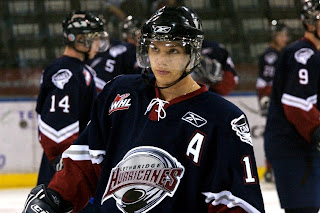 When it comes to Zach Boychuk and the NHL one thing is for sure, it won’t be hard for him to get used to saying the name of the team he plays for.

The star forward of the Lethbridge Hurricanes was chosen 14th overall by the Carolina Hurricanes in 2008 and stuck around with the team for a few games at the end of training camp.
The Aidrie, AB native had an exceptional draft year beginning with the Canada-Russia Super Series followed by the 2008 World Junior Championship. At the end of the WHL regular season he had amassed 33 goals and 72 points in 61 games with the ‘Canes but it was in the playoffs that he took his game to another level.

Boychuk led the Hurricanes in postseason scoring with 21 points in 18 games including a whopping 13 goals – 8 more than the next highest shooter on his team. Lethbridge was the Eastern Conference champions but could not get passed the Spokane Chiefs in the WHL finals.

This year began slightly late for Boychuk who missed time early on with an wrist injury. He did get the chance to play in a couple NHL games with Carolina before returning to Lethbridge for the rest of the season. As the 2008-09 regular season schedule came to a close, Boychuk was fourth in team scoring with 57 points but only appeared in 43 games. His +16 rating sticks out like a sore thumb – but in a good way.

Recently the Hurricanes blew into Edmonton for a late regular season game against the Oil Kings and I had the chance to speak with Boychuk about a myriad of issues. We went back to the fall and he spoke at length about training camp in Carolina and getting a chance to wet his appetite at the NHL level. We also spoke about the 2009 World Junior Championship in Ottawa and how winning at home compared to winning for the first time a year earlier. He was to play a much bigger role in 2009 than he did in Prague but was slowed by injuries... was it still everything he hoped it would be?

I asked Boychuk for a scouting report on 2009 eligible prospect Carter Ashton. Having just gone through the draft year experience, it was interesting to get Boychuk’s impression of the Hurricanes top prospect this year. We also compared how Ashton’s draft ranking differs from his from last year!

Lethbridge was a busy team at the WHL trade deadline and added controversial forward Kyle Beach from the Everett Silvertips. It was a move that many suggested would either vault the ‘Canes into legit contender status or have the complete opposite effect and destroy the room. I asked Boychuk about the addition of Beach and how the WHL’s bad boy has meshed with the rest of his new team. 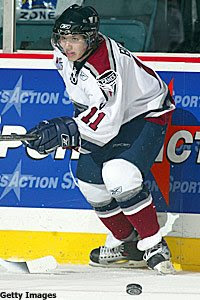 Finally, with the playoffs looming I asked Boychuk if he felt that with a line up consisting of himself, Beach, Ashton, Colton Sceviour, Carter Bancks, Dwight King, Ben Wright, Juha Metsola and Luca Sbisa fresh from Philadephia in the NHL… if he felt the Hurricanes were the team that could potentially eliminate the top clubs like Calgary and Saskatoon.

We now know that Saskatoon will be the first round opponent of the Lethbridge Hurricanes and if you want to know how Boychuk feels his club matches up, plus the answers to the rest of the topics I mentioned above… CLICK HERE.

There are a few different reasons that Lethbridge is being considered the team that no one wants to face this year in the WHL playoffs and the biggest of them might be Zach Boychuk.
Posted by Guy Flaming @ 12:02 AM

You guys got any interviews with Steve Pleau and the gang?? I'm scavenging for some tape.... Got a clip out of the Boychuck interview... Thanks!

nothing from the Kings, they went straight to Calgary after winning Monday night. You might want to check with AJ though.