Today we'll take a look at 5 players who might leave college or Europe and join the Oilers or the Falcons in Springfield next year. 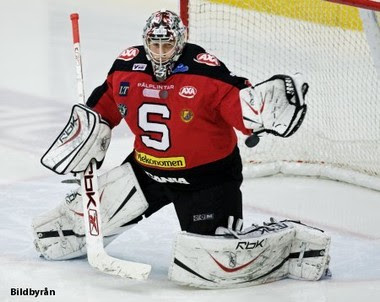 His numbers aren't as good as last year in the SEL, but the 9th round pick from 2004 is an intriguing prospect, and one the TPS has had it's eye on for a while. Could he be another Niklas Backstrom? Whether or not Bjurling comes over next year or not depends on a few things. One is whether or not the Oilers will resign Dwayne Roloson. It's likely they will, which would make the goalie depth chart look pretty similar to this year.

Where does Bjurling fit in? Probably as a partner with Dubnyk in the AHL. Does he want to split time in the AHL making 5 figures, when he could stay at home and make 6 figures?

4. Milan Kytner-Centre-Saskatoon Blades
A depth and defensive guy in Kelowna, has turned into an almost point per game player with the #6 ranked Saskatoon Blades. Kytnar's 60 points in 62 games puts him 3rd in team scoring for the Blades and he has 24 goals on the season. He should get a chance to go deep into the playoffs, but if the 5th round pick from 2007 wants to turn pro next year, he'll have to bulk up in the off season, as he's only 6.0 and 180 pounds. 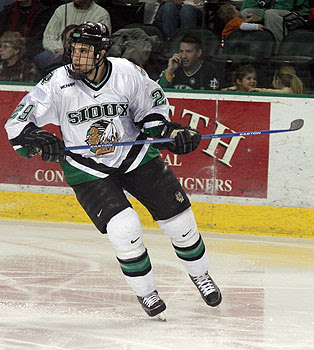 The stocky middle man's numbers are down from last year, but then again he doesn't have T.J. Oshie on his line either. Vande Velde is a great face off man, and is a really good complimentary player, but not a guy who can be the focal point on a line. He'll have completed 3 years at UND at seasons end, and is physically ready for the pro game.

2. Riley Nash-Centre-Cornell University
Heading back to school will be a complete waste for Riley Nash. He can't play in the CHL next year, as NCAA players can't jump ship in their overage years, otherwise known as the Mike Comrie rule when he ditched Michigan for Kootenay, then eventually Edmonton in 2000. An NHL source told me Nash was way behind at Canada's WJC camp, as were most of the college players outside of Cody Goloubef. Nash should have been in the WHL with Swift Current this year instead of going to Cornell. I know there is the argument that he can get stronger in the weight room with less games to play. But after the school day, practice, and homework, how much time is there to work out anyway? He'd be better off getting used to playing a long schedule, and the fact that Cornell started the season so late derailed Nash at Canada's camp. He wanted to play with his brother, and he's done that. Hell, I'm sure the Oilers would sign his brother in Springfield if it meant him coming out early. He needs to turn pro next year, before he starts getting passed by on the depth chart and the Oilers start forgetting about him.

1. Linus Omark-Left Wing-Lulea HF
Before I start in about Omark, check out his goal from earlier this year, the video also features Guy's favorite song. [Guy Edit: Not my favorite song but this will now haunt me in my sleep]


Kevin Prendergast saw Omark earlier this year and was very excited about him. Prendergast told me he's a more skilled Patrick Thoreson, meaning he plays bigger than the 5.09 168 pounds he's listed as. The Oilers assistant G.M. also told me he thinks Omark is smart enough to play with Ales Hemsky as well. The best part is that Omark wants to come over, and even play in the AHL if he doesn't make the team. He's obviously creative enough, the question will be whether or not he can take the North American pounding.

Just a few other notes, I asked Kevin Prendergast recently about 2 othe Euros the Oilers have. He said when he saw Teemu Hartikainen recently he looked pretty good, and that the 6th round pick from 2008, might get some time with the Finish national team this year. The Fin has been compared by some to Thomas Holmstrom in that he's not afraid of taking a hack to create a goal in front of the net. Johan Motin was reportedly steady as well this year. He was a 4th round pick from 2008. 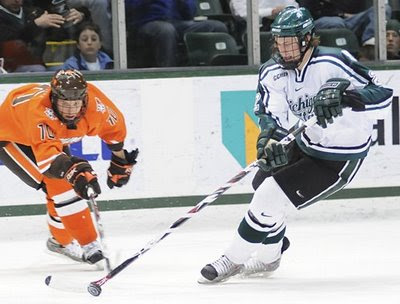 Also expect Jeff Petry to return to Michigan State this year. He does pretty much everything with the Spartans, who had a horrible year this season, but Petry was the lone bright spot. The Oilers are still trying to develop Taylor Chorney, Cody Wild, Theo Peckham, and hopefully next year Joseph Hrabal again next year on the blueline and there might not be enough ice for Petry to develop properly. He'll get that back in College.
Posted by Dean Millard @ 5:00 PM

what do you think are the chances of Jordan Eberle cracking the Oiler's roster next year?

The song in the Omark vid deserves a comment...

It's actually a clip from a Canal+ commercial, that vid. Canal+ focuses heavily on the Premier League, where the song makes a semblance of sense. So... it makes sense, from a certain point of view.

I am quite excited to see where Kytner fits next season. I thought he was great for Slovinia in Ottawa this Christmas. I see a euro-Kyle Brodziak type player as his future . . . I am just worried his faceoff abilities (but bulking up should help that) but he was the best SVK Faceoff man at 50.4% (and 25th overall).

I don't see Eberle in an Oilers uniform past the pre season next year. I would put his chances at making the team at about 5%.

Sorry guys, I tend not to get too excited anymore as to what is coming up the pipeline...

Not to sound like I'm piling on and it's only two years, but what exactly has the OIL farm been able to develop over the last few years? I think we had better development when we were dividing our players amongst other teams AHL affiliates.

I believe if you are to check the current OIL roster you will find but one, Reddox, who had played most with the OIL (Falcon) affiliate, and actually he played a few more games in the ECHL... The three best playing up with the OIL, Zack, Gilbert, & Brodziak spent most of their time in the minors with another organization. Even the lesser of the call-ups, Jacques and Pouliot played more games with a split affiliates. You can look to JDD, but not really, as he is not allowed to play...

So what has been developed... Something is rotten to the core here, as the system does not match what is being drafted?
Cheers

It's an interesting point you make. I will give you my opinion on the situation. The Falcons first year were coached by Buchy, who I think set some players back with his coaching style. The off the glass and out break out is a great way to get outshot most of the time. I honestly think if Rob Daum had coached this team from the beginning in Springfield there would be more development. Let's way until next year to see if guys like Taylor Chorney, Theo Peckham, Gilbert Brule and Slava Trukhno are farther ahead than last year before writing off their minor league system.

Omark's Luleå got eliminated tonight in game 5 of their best of 7. Omark was a gamebreaker for Luleå every night but in the end couldn't do it all. Nightly, he was the most dangerous player until Frölunda figure out how to shut him down (answer ironically was former Oil prospect Freddie Pettersson).
Omark was Luleå's offensive go-to-guy and got 5 assists (although no goals).
How this translates to the NHL is hard to say... I'd suggest Lowetide is running the numbers through his super simulators as I type.
Point is: Omark is a star at age 22. Oilers have got a good one.